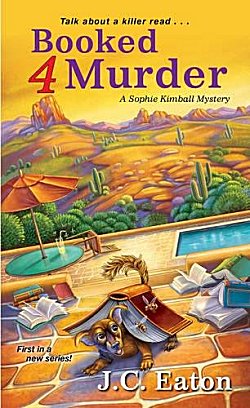 First Lines: "I'm telling you, Phee, they were all murdered. Murdered by reading that book."

Sophie "Phee" Kimball is a divorced, middle-aged mother who is an accounts clerk for the Mankato Police Department in Minnesota, but when her mother makes a frantic call, she finds herself on a plane headed for Sun City West, Arizona.

Ever since Harriet Plunkett's book club started reading a little-known book, members have started dropping like flies, and word is spreading that the book is cursed. Harriet is convinced that Phee has absorbed all the knowledge she needs from working at the police department to solve this mystery. Phee thinks the whole thing is crazy, but her mother is an irresistible force... and Phee isn't exactly an immovable object.

You definitely get a feel for life in a retirement community from reading Booked 4 Murder. I haven't been over on that side of the valley for a while, so it's good to know that you still have to watch out for golf carts. There's a lot to like about this debut mystery even though it has one or two small things I'd rather do without. I've obviously been spoiled by my own family's behavior because pushy, interfering, "colorful" mothers like Harriet Plunkett drive me nuts. Harriet also makes a big production of her rescue dog she's named Streetman, but I found Streetman to be very much underutilized throughout the book-- other than showing that Harriet cares more about the dog's needs than she does her own daughter's. Ah well. If nothing else, I have a greater appreciation for my own mother!

But as I said, there's a lot to like. Phee may not have many police/investigative smarts, but she does have a friend in the Mankato PD whom she can call for advice. And she does need advice. The writing team of J.C. Eaton has created a mystery with many layers, and I had fun watching Phee piece all her clues together. I have to admit that I found the reason for the whole "cursed book" scenario rather disappointing-- probably because it's easy to see it actually happening. Read it for yourself and see if you agree. Phee's mother may have worked my last nerve, but I still found Booked 4 Murder to be a very enjoyable read.