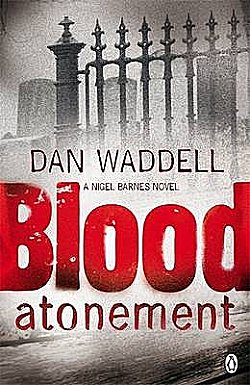 First Line: The candle on the ledge guttered as it neared its end, shadows dancing on the wall.

Still on the mend from the events in The Blood Detective, DCI Grant Foster is supposed to be on light duty. That goes out the window when a single mother is murdered and her fourteen-year-old daughter abducted. When his investigation turns up strikingly similar circumstances in the disappearance of another young teenager three years previously, Foster believes there is a link, and he turns to genealogist Nigel Barnes to piece together the facts and find the connection.

The trail leads Barnes right back to 1890 when a young couple arrived in the UK. This husband and wife were running away from a terrible crime...a crime that is having horrible repercussions in the here and now.

Having enjoyed the first book in this series, I had to get my hands on this second, which also appears to be the last. Blood Atonement acknowledges the elephant in the room: the Church of Jesus Christ of the Latter Day Saints and the powerhouse position they have in the world of genealogy. Members may not be happy with Waddell's depiction of their religion since it touches on fundamentalist offshoots that practice polygamy as well as the actions the church has taken to erase (or at least cover up) things that have happened in their past that may not show them in a favorable light. It's this subterfuge that makes Barnes' investigation for the police so difficult.

The solution is convoluted and laced with a heavy dose of irony, but this isn't really what grabbed most of my attention. The still-healing Foster is brought face-to-face with a young boy-- eleven-year-old Gary-- whose life is in danger, and he takes it upon himself to protect him. Gary has been nothing but trouble most of his short life, but it's heart-warming to see how Foster warms up to him-- and how Gary reacts to him. Protecting Gary brings several of Foster's own shortcomings into sharp focus, and the seasoned copper knows he needs to mend his ways.

To be honest, Blood Atonement's mystery had a bit too much religion for my taste, but the characters are what made the book. I like watching how Nigel Barnes sifts through archives to find answers, and DCI Grant Foster is just the sort of homicide detective I like.