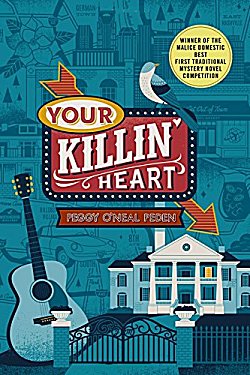 First Line: He was an icon in country music.

Sometimes it feels as though Campbell Hale is one of the few people in Nashville who isn't part of the country music scene. She's busy trying to get her travel agency off the ground, but when she gets the opportunity to visit the mansion of deceased country music legend Jake Miller, she's not about to pass it up.

As Campbell snoops around, she finds more than memorabilia and sequined suits: she finds Jake's widow Hazel resting in a bedroom on the main floor. Later in the day, Hazel's death is splashed all over the media, and Campbell realizes that she may have been the last person to see the woman alive. This one small fact may very well put her life in danger.

I really enjoyed the country music setting of Your Killin' Heart as well as the behind-the-scenes look at a travel agency. The mystery had a high enjoyment factor, too, even though I'd deduced the identity of the villain before the end.

What I didn't enjoy was Campbell Hale. This main character's sole reason for getting involved in a murder investigation is because she's nosy. She forced her friend to take her with him to the Miller mansion, and the second she was left alone, she was off and running-- snooping down halls and opening doors. (When Campbell gets old and loses some of her mobility, I can see her sitting at her window, twitching the curtain back so she can keep an eye on all her neighbors' business.) She also had what I call a TSTL Moment (Too Stupid To Live) when she agrees to go alone to a suspect's house.

Even though Campbell's behavior moved from being extremely annoying to moderately amusing by book's end, I don't think I'll be visiting her in Nashville again. It's a shame. I like that town.