The Chalk Pit by Elly Griffiths 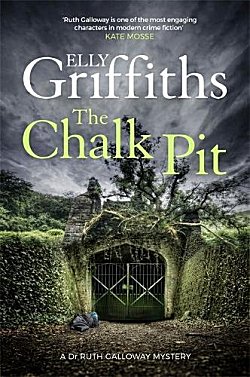 First Line: He shouldn't really be driving; they all know that.

Forensic archaeologist Dr. Ruth Galloway is called in to take a look at human remains found in one of the countless chalk-mining tunnels beneath the city of Norwich. One of the very first things she notices is that the bones are almost translucent--  a sign that they were boiled soon after death. Once again Ruth finds herself involved in a murder investigation.

Another murder is just what DCI Harry Nelson needs. He's busy trying to find a missing homeless woman who reportedly went "underground." Could she be in one of those chalk-mining tunnels-- and is she still alive?

As Ruth and the police continue their investigations, they begin hearing rumors of secret societies and ritual killings. When a dead body is found with what appears to be a map of "the underground," they all realize that their search has just begun... and that more bodies may be found before a killer is caught.

Yet again Elly Griffiths has woven her magic throughout a story of abandoned mining tunnels, murder, the homeless, and the personal lives of those trying to stop a killer. The archaeology and the history of the old chalk tunnels under Norwich are integral to the mystery, but-- as always with Griffiths-- it's the characters who make her Ruth Galloway books something special. Nelson is saddled with a boss whom he refers to as "She Who Must Be Obeyed." In so many books that I read, that's how the boss remains-- a one-note piece of cardboard. Not here in The Chalk Pit. Readers get to see a different side of Nelson's boss that just might change their opinions of her a bit.

Griffiths also puts names and faces to several members of the homeless community in the Norwich area-- what they have to do and where they have to go in order to survive. It is a personal and much-needed look at a maligned segment of many countries' populations.

Even in this serious mystery, we're treated to a bit of levity now and again, as when single mother Ruth mourns the days when she could leave the house with just her small purse and her cell phone-- something all mothers undoubtedly miss. The Chalk Pit's mystery I found to be a bit easier to solve this time around, and the solution did strain my credulity a bit, but this is still a very good read. Be forewarned: while the mystery is solved by book's end, it does end on a cliffhanger involving the personal lives of the two main characters. Fellow fans of this series are going to be as eager as I am for the next book to discover what happens.

And if you've yet to sample this wonderful series, you need to do something about that, like getting the first book The Crossing Places. You've got a lot of fantastic reading in store for you!