An Important Family by Dorothy Eden 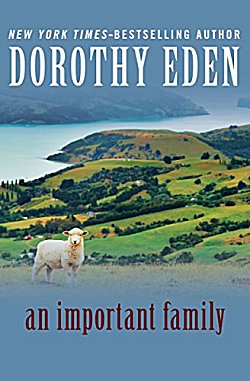 First Line: When she arrived on the doorstep, Kate couldn't bring herself to ring the doorbell.

There have been too many tragedies in young Kate O'Connor's life, and she relishes the chance to start over by immigrating to New Zealand as companion to Sir John Devenish's wife and daughter. Once the long sea journey has been endured, the wild landscape of Kate's new home exhilarates her, but her job becomes much harder. Sir John's womenfolk were not happy with the move from their comfortable, privileged life in London, and nothing they see in New Zealand makes them change their minds. The more recalcitrant the two women become, the more Kate learns about the Devenish family secrets.

I have to say that this is the first book by Dorothy Eden with which I've been disappointed. The story was saved only by the descriptions of the New Zealand landscape and weather and by how some of the other settlers had carved out lives for themselves.

What withered my enthusiasm for this book on its tender young vine was the cast of characters. To be blunt, too many of the cast were either completely unlikable or thought solely with their reproductive organs... or both. Definitely not my kind of cast! Of course, since no two people ever read the same book, your mileage may vary-- and I certainly hope it does.