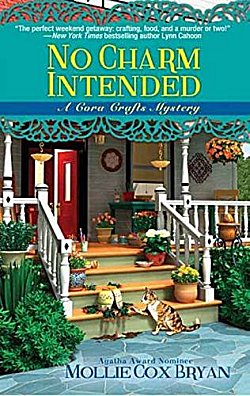 First Line: I kidnapped her.

Cora Chevalier is very happy to have ended her career being in charge of a women's shelter in the big city. She's finding that running craft retreats in a big old Victorian mansion in small town North Carolina to be supremely satisfying-- especially since she's working with her best friend Jane.

Her second retreat, which is all about wildcrafting (using items found in nature to create all sorts of things), has barely had time to get started when the local nanny, Gracie Wyke, goes missing. Jane's young daughter is quite upset over Gracie's disappearance, and so is Gracie's boyfriend Paul. The police think Paul is responsible, but Cora believes the young man is in danger. But as Cora and Jane begin uncovering clues and a body turns up in an abandoned amusement park, they begin to question Cora's decision. Not only are they facing the very real possibility that an innocent person could go to jail-- this could put an end to Cora's new business and ruin her reputation.

First off, I want it known that I would love to attend one of Cora's craft retreats. The author makes them sound like so much fun, and I like how Cora can be doing two or three things at the same time yet still plan ahead for future activities like enlarging the kitchen so she can hold baking classes.

Bryan has skillfully put together a very intriguing mystery. It took me a long time to figure out exactly what was going on, and I love that.

As good as the mystery is, and as delectable as all the crafts are, it's the cast of characters that makes this series a winner. Even though she's seen more than her fair share of the evil in the world, Cora still has a heart of gold and tends to be too trusting. Her friend Jane, on the other hand, is way too suspicious. I know Jane's suspicion is being used to keep Cora's good intentions in check (or at least to make Cora think twice about them), but I find Jane becoming very annoying. I hope something happens in future books to dial that element of her personality down a notch or two.

Continuing with the characters, I like seeing how some of the people signed up for the retreat join in the crime solving-- and how they all pitch in when someone needs help. Mollie Cox Bryan's Cora Crafts series encourages readers to solve crime and feel good-- all at the same time. Bring on book three!