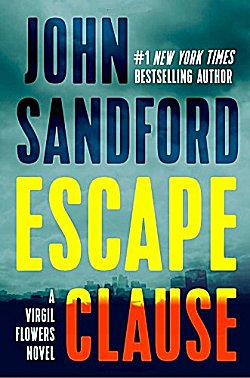 First Line: Peck popped a Xanax, screwed the cap back on the pill tube, peered over the top of the bush and through the chain-link fence, and in a hoarse whisper, asked, "You see the other one?"

A pair of large and very rare Amur tigers have vanished from their cage in the Minnesota Zoo, and authorities are afraid they've been stolen for their body parts, which are prized in traditional Chinese home remedies.

When BCA agent Virgil Flowers is assigned to the case, he almost heaves a sigh of relief. His relationship with Frankie has been heating up, but Frankie's sister Sparkle is complicating matters. Sparkle is also working on a research project concerning immigrant workers which is guaranteed to be unpopular with some very violent people. Angry tigers... or angry Frankie? Virgil knows which one he'd rather face.

Shortly after the tigers are stolen in Escape Clause, one of the thieves makes a remark about the female which provided so much anticipation that it lasted throughout the book and helped me ignore my intense dislike of so-called medicine that relies on exterminating the wildlife of this planet.

This was my first foray into Sandford's Virgil Flowers series, and I enjoyed the humor and the character of Virgil. I liked his quick, logical thinking and the way he got the investigation in high gear with very little fuss. It was also a pleasure to see that various law enforcement agencies could actually work together harmoniously for a common aim.

The pace did bog down a bit when Flowers had to wait for the bad guy-in-chief to come unglued and make more mistakes, but then there was Sparkle to worry about. Sparkle had a typical young person's lack of vision, with no concept of what her dissertation was getting her (and others) into.

Yes, indeed. I enjoyed my first visit with Virgil Flowers, and I'm sure that there will be more in the future.