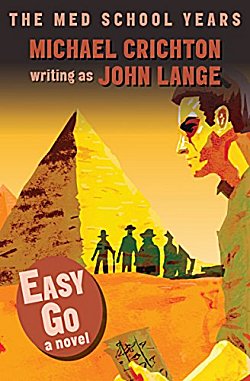 First Line: The Great Pyramid of Cheops filled the horizon.

There's nothing better that brilliant Egyptologist Harold Barnaby loves to do than go back over translations of ancient hieroglyphics and correct all the errors he finds. That's how he finds a message that just might lead him to a tomb holding fabulous treasure.

He could put his name on the greatest archaeological find of the century, but there's one slight problem: he doesn't just want to dig it up. He wants to steal it. Unfortunately he's going to need help accomplishing this. With the aid of a smuggler, a thief, and an English lord, Barnaby plans his heist. What none of them realize is that tomb raiding is much trickier than they thought.

I've been slogging through a raft of unlikable characters in my reading lately, and I needed a complete change of pace. I was in the perfect mood for an adventure about finding-- and trying to steal-- the lost tomb of a pharaoh. Written under the pen name John Lange while he was still a resident, Michael Crichton's Easy Go was exactly what I needed when I needed it. (The man wrote books while in medical school and as a resident? Did he need no sleep?)

Yes, the book has its problems. The romance was rather feeble. Not only did it not seem to have much purpose in the book, it didn't do a thing for me. The characters were also stereotyped, but that almost goes hand-in-hand with most thrillers where the emphasis is on plot over character.

I was more than willing to overlook the weaknesses for the luscious story. Speaking of weaknesses, I have one for a heist story well told, and this one delivers. I've always been fascinated with ancient Egypt and wondered what it would be like to actually find a pharaoh's tomb. From finding one, it's not that big of a jump to wonder what you would actually do with all that treasure-- especially if you thought you had a good chance of stealing it.

If you love ancient Egypt and are in the mood for a bit of fast-paced tomb raiding, give Easy Go a try. You might just enjoy it as much as I did.