Cruel Is the Night by Karo Hämäläinen 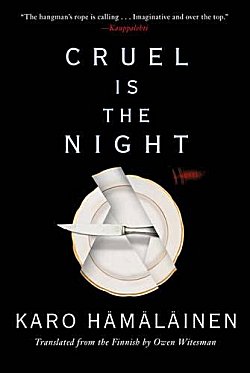 First Line: When Ludwig van Beethoven composed the theme for his famous Bagatelle in A minor, he scarcely could have imagined that it would be playing more than two hundred years later in a luxury flat in London.

Four Finnish friends meet for dinner in an opulent London apartment. It's been ten years since the host, Robert, has seen his former best friend, Mikko. Their friendship had them parting ways over ideology: Robert the banker made millions off unethical interest rate manipulations while Mikko is an investigative journalist who's dedicated himself to bringing down corrupt financiers and politicians. Rounding out the foursome are Robert's trophy wife Elise and Mikko's wife Veera.

By the end of the evening, three ringing cell phones go unanswered because their owners are all dead.  Which one survived?

From a fantastic prologue featuring unanswered ringing phones, Cruel Is the Night quickly became a chore for me to read-- despite an added incentive of trying to recognize the Agatha Christie references. The reason why reading this book was such a chore may make some of you sit up and take more notice: it had a cast of characters straight out of Gone Girl. I only lasted twenty-five pages into Gillian Flynn's novel because I wasn't going to waste any more of my life on such repulsive main characters. The cast of Hämäläinen's novel is almost-- but not quite-- as bad as Flynn's, which must be the reason why I was able to finish reading the book.

In addition to the cast, the pace was glacially slow, inviting readers to decide which character was the sole survivor through acres of backstory, but I really didn't care who walked out of there alive. Cruel Is the Night was just not my cup of tea. Your mileage may vary-- and I hope it does.