The Voices Beyond by Johan Theorin 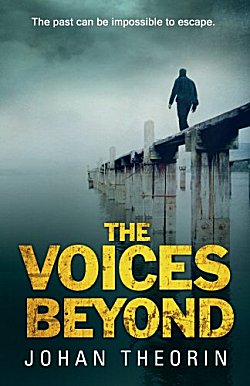 First Line: The ghost ship came gliding out of the darkness across the black waters of the Sound, giving way to nothing and no one.

It is summer on the beautiful Swedish island of Öland, and visitors are arriving in their thousands to enjoy the sun and the water. Among the visitors is young Jonas Kloss, who's looking forward to staying with his aunt and cousins. But one moonlit night when he takes a small boat out on the water, a ship looms out of the darkness and the horror the young boy finds on board has him fleeing for his life.

Jonas finds himself on the doorstep of elderly Gerlof Davidsson, a man of the sea and native to Öland. Once Gerlof is able to convince Jonas to talk to him, the old man knows that this summer will be like no other. The Homecomer has returned, and he's waited a lifetime to exact his revenge.

I loved the previous three books in Theorin's Öland Quartet. The man is a master at creating complex characters and building suspense. Unfortunately The Voices Beyond fell flat for me. Gerlof was still his charming curmudgeonly self with his loneliness and painfully aching legs, and young Jonas was wonderfully complex as well. And that setting! Theorin is also a master at building a setting so vivid and detailed that it counts as one of the characters in his books.

Where the book fell flat was in its pacing. The point of view was constantly shifting from Gerlof to Jonas to a young musician named Lisa to the Homecomer himself who spoke both from the present day and from the time of Stalin's reign of terror. The constant shifting didn't confuse me at all, but the very short chapters moving from one character to the next actually slowed the pace down to a crawl and made the book a chore to read.

As a whole, would I still recommend the Öland Quartet? Yes, I would. The first three  (Echoes from the Dead, The Darkest Room, and The Quarry) are superb, and who knows? The slow pace of The Voices Beyond may not bother you at all. For anyone with a fondness for Scandinavian crime fiction, evocative settings, and complex characters, Johan Theorin's Öland Quartet should not be missed.