Ruler of the Night by David Morrell 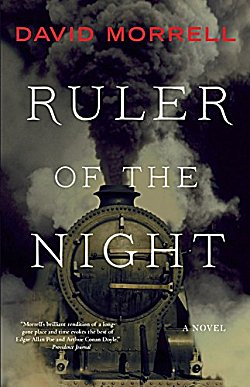 First Line: On Thursday evening, 22 march 1855, a frowning gentleman studied a two-page document that lay on his substantial desk.

1855. The railway has fueled the industrial revolution and changed English society forever. An entire day's journey can now be completed in a matter of hours. People love this newfound freedom.

Thomas De Quincey and his daughter Emily are leaving London on the train. As a safety precaution the compartments are locked before the trains begin to move, so when the De Quinceys hear terrible noises from the next one, there's nothing they can do until the train stops and everything is unlocked. What they find is that a man has been stabbed to death-- and the killer is nowhere to be found. Joining forces with Inspector Flynn and Sergeant Becker of Scotland Yard, they pursue this ruthless killer back to London, hoping to bring the person to justice before more murders are committed.

Ruler of the Night is the brilliant conclusion to David Morrell's Victorian mystery trilogy. I cannot recommend these books highly enough. Each centers on a crime that changed how the public viewed the world. Murder As a Fine Art centered on the unsolved Radcliffe Highway murders; the second, Inspector of the Dead, on the numerous assassination attempts on the life of Queen Victoria; and this third and final book on the first murder on an English train. Morrell also changes up how each book is written. The first is a completely Victorian novel; the second only partially so; while Ruler of the Night is written as a modern novel. This mirrors how rapidly society was changing at the time.

Like the first two books in the trilogy, Ruler of the Night immerses the reader in the world of Victorian England-- its sights, its sounds, its smells. Incidents in the book-- like De Quincey's translation of a German edition of Sir Walter Scott-- actually happened. Action scenes are vivid, and it's wonderful to see how the many delicate strands of the plot weave together.

But Morrell is not content to focus on period detail and action scenes. His characterizations are what make this trilogy so very special. Thomas De Quincey was an amazing man with a prodigious addiction to laudanum. It's safe to say that most drug addicts are not sympathetic characters in fiction, but "the Opium Eater" is. This is due in large part to the character of Emily, his daughter. Emily is a person worthy of trust and affection. She sees her father for whom he is, and she loves him deeply. Her clear-eyed love allows us to care for him, too.

The police officers also shine. By the time of Ruler of the Night, Inspector Flynn has basically taught Sergeant Becker everything he needs to know to become an excellent detective. Their changing attitudes toward Thomas and Emily mirror those of the readers.

In reading books, I've finally made reading the author's notes and acknowledgments a habit. You never know what nuggets of gold you'll find. In the case of David Morrell's Thomas De Quincey trilogy, you'll find fascinating tidbits on the history behind the stories as well as recommendations on other authors and books to read.

If you are even the slightest bit interested in historical mysteries-- especially those set in Victorian England-- you simply must read these three Thomas De Quincey novels. They are marvelous.