Murder at the Fortune Teller's Table by Janet Finsilver 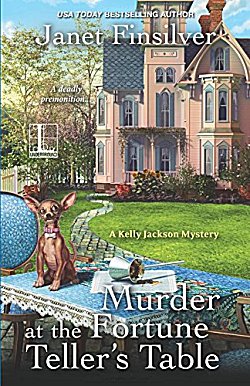 First Line: I stepped out of my Jeep and stopped to marvel at the colorful Redwood Cove scene before me.

Kelly Jackson has returned to Redwood Cove with a trailer filled with her belongings. It was a long trip to and from her parents' ranch in Wyoming, but Kelly is looking forward to making the Redwood Cove Bed and Breakfast her new home while learning the ins and outs of her job as manager.

When a woman starts searching for a couple she hasn't seen since the 1960s, Kelly and a local senior citizens group called the Silver Sentinels are more than happy to lend a helping hand. But when that same woman is found dead beside the body of a Greek fortune teller-- and one of the Sentinels is attacked, they know they're in over their heads. Kelly may have her hands full with a food and wine festival in town, but there's a killer on the loose who's obsessed with old secrets. She and the Sentinels have a fifty-year-old mystery to solve.

I continue to enjoy Janet Finsilver's Kelly Jackson series. Like the others, Murder at the Fortune Teller's Table is light and fun, has an intriguing mystery and very likable characters that make you want to keep coming back for more.

If it weren't for the dead bodies, Redwood Cove would be a little slice of paradise on the northern California coast. Kelly has a boss most of us would give our eye teeth for, and she proves over and over again that she is a smart and truly caring person. When she and the Silver Sentinels realize that they're over their heads in solving this mystery, they don't plow full steam ahead, they talk things over with Deputy Sheriff Stanton and arrive at a compromise that means they can continue to help the police with the type of investigative work that they do best.  I like seeing fictional characters work with the police-- and having fictional police who are willing to work with ordinary citizens.

One of the features that I enjoy most about Finsilver's series is the fact that service dogs appear in each book-- and it's amazing just what sort of services they're capable of performing. In this third book, we get acquainted with hearing assistance dogs and a dog who is a companion to a man with PTSD. I love this element of the author's books and think it adds a great deal to the entire series.

Beautiful setting, intriguing mystery, light, fun, and with characters and canines you can't help but want to bring home with you... recommending Janet Finsilver's Kelly Jackson series is a piece of cake.