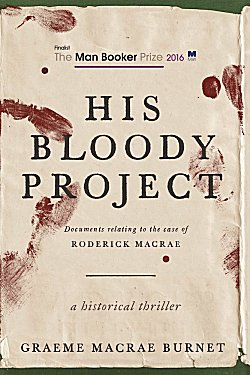 First Line: I am writing this at the behest of my advocate, Mr Andrew Sinclair, who since my incarceration here in Inverness has treated me with a degree of civility I in no way deserve.

Three people have been brutally murdered in a remote farming community in the Highlands of Scotland in 1869. Seventeen-year-old Roderick Macrae has been arrested, and there is no question that he did commit the murders. But why would such a shy, intelligent boy do something so terrible? And... will he hang?

His Bloody Project is presented as a collection of documents discovered by the author, Graeme Macrae Burnet. Readers begin with statements from the police and the villagers of Culdie in Ross-shire. Impressions of the boy vary wildly, but chief among the papers is Roderick Macrae's own memoirs where he tells readers the series of events that led him to murder. Medical reports, psychological evaluations, and courtroom transcripts from the trial follow.

It's oh-so-easy to forget that you're reading fiction instead of true crime. Beautifully delineated are the lives of the crofters (farmers) who must contend daily with the whims of the landowners, factors, and constables. And young Roddy's life is heartbreaking. His life definitely held a great deal of promise, but it was ruined by poverty and the maliciousness of others.

His Bloody Project unfolds to its inexorable conclusion, allowing readers to absorb the hopelessness of Roderick's life. Nothing is spelled out; readers are allowed to think for themselves every step of the way... and to wonder if the trial's outcome may have been different if events involving Roderick's sister had been allowed to come to light. This certainly isn't cheery reading, but it's a masterful bit of storytelling.