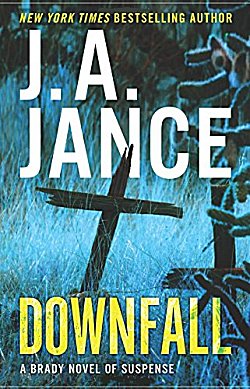 First Line: Sheriff Joanna Brady pulled into the parking place in front of the Higgins Funeral Chapel, put the Buick Enclave in park, and then sat staring at the storefront before her, only vaguely aware of her surroundings.

Cochise County Sheriff Joanna Brady has so much on her plate that stuff is sloshing off the sides. She's pregnant. She's facing re-election. Her daughter is heading off to college, and she has two deaths in the family from which to recover. It's a good thing Joanna is made of sterner stuff because, to add to everything else, a very strange new case has just hit her department.

The bodies of two women have been found at the base of what Bisbee locals call Geronimo Peak. They fell to their deaths but was it murder/suicide or a double homicide? And what's the connection between the two? As far as anyone is concerned, they didn't even know each other.

I don't think I will ever tire of Jance's Joanna Brady mysteries. For me, they are the perfect blend of character, setting, and story. Joanna is independent, brave, sharp as a tack, and loaded with common sense. Her mind has a laser-like quality that can cut to the heart of a problem and come up with a solution using her available resources. I love watching her in action. The setting of Cochise County, Arizona, and the old mining town of Bisbee is one that I'm very familiar with, and so is Jance (who grew up there). As for the story, Jance is brilliant at weaving together a fast pace with various subplots that range from the personal and emotional-- like the deaths of loved ones and pregnancy-- to more topical issues that can still hit close to home. The trouble is, there's not much I can say about those topical issues without giving away a lot of the story.

Since I can't talk about the plot, I will say that there's a fine scene involving Joanna who's got herself into a bit of a pickle, and she finds that she's got to rely on the Little Red Hen and a dog. (Two of the best things you can depend on when you find yourself in a similar mess.) For me, the continued high quality of this series all boils down to character. Like the FBI agent Joanna is saddled with... or the chief deputy who's still a question mark in Joanna's mind. There's only one character I can do without in this entire series, and that's Marliss Shackelford the local journalist. That character works my last nerve, but I don't think Jance will ever get rid of her. Marliss is just too much fun to write.

Now, if you've arrived at the opinion that I love this series and enjoy what Jance can do with her characters and a puzzling murder or two, I'd have to admit that you have reached your destination. If you're not familiar with this series, I wholeheartedly recommend that you dive right in. You can probably start anywhere, but be forewarned: the personal lives of the characters will then be all out of sequence.