The Killing Bay by Chris Ould 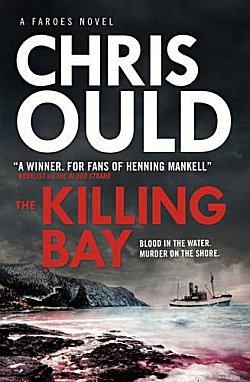 First Line: He worked on his knees now, as if praying.

International activists have arrived on the Faroe Islands intent on putting an end to the traditional whale hunts. Feelings are running high when a woman known to be working with the activists is found brutally murdered mere hours after a confrontation between the two groups. The circumstances seem designed to light a fuse to this emotionally charged situation.

As local detective Hjalti Hentze begins to investigate with some help from British Detective Inspector Jan Reyna, he quickly learns that crucial evidence is being hidden... and that this murder has other, very sinister, aspects to it.

Having mostly enjoyed my first visit to the Faroes in Ould's The Blood Strand, I was eager to read this second book in his series. I found it to be better than the first, although hampered by some of the same problems. However, one of the problems is not the pronunciation of Faroese words and names. A simple pronunciation guide is right in the front of the book, and I found it to be invaluable.

The Faroe Islands are a commanding, almost otherworldly, setting, and the author certainly knows how to bring it to life by including cultural traditions like the grind (pronounced "grinned") or traditional whale hunt. The landscape is awe-inspiring. Many of the roads that connect the islands take advantage of existing volcanic tubes, although I doubt very much that I could persuade myself to travel through this particular one:

So far all the tunnels I've been through had had two traffic lanes, and they were all lit. The Árnafjarđartunnilin took me by surprise because it had no lights and the road narrowed to a single lane. It was like driving into a mine, with no indication of how far and how deep you would have to go. It was unnerving and the roughly cut passing places carved out of the rock didn't make it any less so.


Jan Reyna is still there trying to learn more about his mother. He's much more comfortable with the people and culture than he was in the first book, and he does help Hjalti Hentze with the murder investigation from time to time. Reyna's chapters are written in the first person to separate his opinions from those of his Faroese counterpart. Hentze is by far the more interesting character in my opinion. This investigation is complex and extremely interesting-- and made more difficult by Hentze's relationships with some of the suspects.

Once again, like The Blood Strand, there is a lot to like about this book, but The Killing Bay also suffers from way too much middle that does little to advance the characters or the plot. I will continue to read this series for the simple reason that I am very intrigued by the mystery that surrounds Jan Reyna. I must know what it is!