The Darkness Knows by Cheryl Honigford 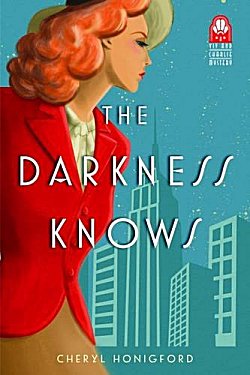 First Line: Vivian's scream was a thing of beauty-- startling and pitch-perfect, as usual.

It's October 1938, and radio is king. Vivian Witchell has landed a recurring role on a popular detective serial, The Darkness Knows, and she's determined to do whatever it takes to become a star. But when you're an actor, your career can change direction in a heartbeat. When Vivian walks into the employee lounge and finds the body of the radio station's biggest (and most hated) star, she's horrified to discover that the dead woman is clutching a letter that identifies her as the next victim. Now Viv's got a lot more on her mind than remembering her lines.

Cheryl Honigford's first Viv and Charlie mystery brings to life the days of radio serials. As a child, my mother would sit with my grandmother in the dark listening to their favorite radio programs. My mother's was The Shadow Knows, which reminds me of the title of this book, so I was favorably inclined toward The Darkness Knows from the beginning. I'm happy to say that I wasn't disappointed.

As I've already said, Honigford added just the right amount of historical detail to put me right in the middle of the golden days of radio. Radio stars aren't any different from Hollywood stars. Those starting out in their careers are cutthroat when it comes to obtaining the right parts that will get them noticed and lead to fame and larger paychecks. Viv had to deal with this just as much as she had to deal with finding a killer.

This leads me to Viv's character. She's a likable enough person, but she's not the girl next door. She's ambitious. She's self-centered. A lot of the things she does in The Darkness Knows are publicity stunts aimed at furthering her career, and she does them cheerfully. Honigford does an excellent job walking a tightrope with Viv's characterization. Viv is nice... but not "too" nice.  On the other hand, working class Charlie the private detective I thought was completely likable. If there was anything about these two characters that I really didn't care for, it was the amount of romance between them in the story. That's just not my thing, although I know I'm probably in the minority.

Even though I knew the bad guy from the start, I still enjoyed reading this first Viv and Charlie mystery. The period Chicago "radio days" detail drew me right in, and I enjoyed watching how long it took the others to figure out whodunit.  Shame on me!