Open and Shut by David Rosenfelt 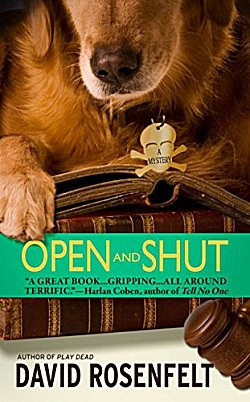 First Line: The Lincoln Tunnel is a scary place.

After a long, hard day of being a defense attorney in Passaic, New Jersey, Andy Carpenter wants little more than the companionship of his best friend, Tara the golden retriever. The women in his life are just too complicated. At a time when he finally thinks that he knows the answers, his dad-- a legendary ex-D.A.-- drops dead right in front of Andy during a game in Yankee Stadium.

In shock, Andy learns that the hits just keep on coming. His father has left him a $22 million fortune Andy never knew existed as well as a racially charged murder case that could burn down City Hall. Doing his best to serve justice and to honor his father, Andy finds himself digging up political skeletons and family secrets-- both of which people are more than willing to kill him to keep.

There is definitely something in the water of New Jersey because authors with an abundance of wit seem to spring from its soil in gratifying numbers. Brad Parks, Chris Grabenstein, Jeffrey Cohen, Janet Evanovich, and David Rosenfelt... to name a few.

Rosenfelt's Andy Carpenter is a first-rate smart mouth with quick wits and a soft heart (just like I like all my heroes). His ex-wife is a spoiled little rich girl who's never found a need to abandon Daddy, and the woman investigator in his law practice wants more commitment from him than Andy's ready to give. No wonder Tara represents his best relationship.

There are two main plot lines in Open and Shut: where Andy's father got that $22 million, and the retrial of Willie Miller, a man who was convicted of a murder he didn't commit. Both are interesting, and how Rosenfelt connects the two is very good. However, the pace is like a yo-yo. Fast. Slow. Fast. Slow. It needed some tightening to keep the book's momentum running smoothly. But this is the first of a long-running series, and since I have a penchant for canines and New Jersey writers, I know I'm going to be back for more.