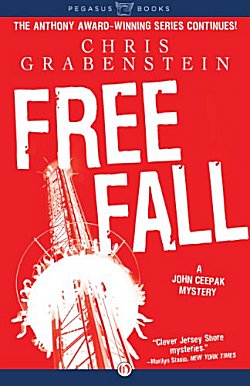 First Line: For a cop, there's nothing worse than hearing an old friend say "I didn't do anything, Danny!" two seconds after you pull her out of a nearly lethal cat fight.

If a cop got a nickel for every time he heard someone say, "I didn't do it!" he could live a life of ease on a Caribbean beach. But it's harder to ignore when a friend says it. Danny Boyle's friend Chris is a home health care aide, and she's been accused of aggravated assault by one of Sea Haven's elite.

Danny and Chief of Detectives John Ceepak trust Chris and work hard on her behalf, but when one of her patients turns up dead, the two detectives are faced with a question no policeman wants to hear: Did I just help a friend get away with murder?

It's with a real sense of sadness that I've come to the end of this marvelous series. I live in hope that Chris Grabenstein will see fit to continue it. It's always been filled with (often) laugh-out-loud humor-- and Free Fall certainly isn't an exception-- but the real reason I love these books is the growth of Danny Boyle's character. At the beginning, he's a rather lazy kid who wants to do good and have a good time on the beach, but he lacks real direction. That's where John Ceepak fits in. Ceepak is a truly good man who sometimes seems to be too much of a straight arrow to be real, but he's the role model Danny Boyle was hungering for. Now in the eighth book, Danny has grown up. He's had to do some really tough things in the line of duty. He's been affected by them and is still facing the consequences, but he's no longer a kid. Now the team of Ceepak and Boyle is a true partnership. And it makes you proud... as though you had something to do with it.

The suspect pool in Free Fall is long and distinguished, and it's simply a matter of narrowing it down to the right person and the right motivation. Sometimes those are the most enjoyable mysteries to solve.

If you enjoy mysteries filled with action, intriguing investigations, marvelous characters and emotions that run from gales of laughter to (now and then) brushing a tear from your eye, I heartily recommend Chris Grabenstein's Ceepak and Boyle mysteries. Begin at the beginning with Tilt-a-Whirl. The entire series is a delight.