For Time and All Eternities by Mette Ivie Harrison 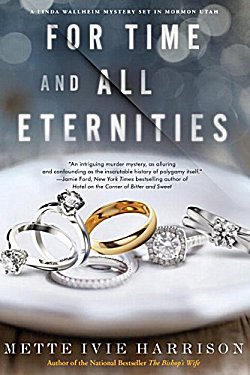 First Line: My fourth son, Kenneth, pulled in the driveway as I was cleaning up the breakfast dishes.

Marriage to the daughter of a polygamous family is something that Mormon bishop's wife Linda Wallheim never envisaged for her son Kenneth. Polygamy is a practice Linda abhors, feeling that it dehumanizes women and makes children vulnerable to unhealthy family structures. But when family patriarch Stephen Carter invites Linda and her husband for a visit, they accept. Reluctantly.

With his five wives and twenty-two children, Stephen is convinced that his way of life is righteous, but Linda cannot get over the feeling that something is deeply wrong-- even though she has no concrete proof. When one of the family members is found murdered, Linda vows to stay at the compound as a sort of liaison between the unworldly wives and children and the police who must investigate the crime. It's a situation in which she does good for others at great personal cost to herself.

Mette Ivie Harrison continues her engaging series in this third book to feature Linda Wallheim, a caring and compassionate Mormon bishop's wife who would nurture the world if given half the chance. In For Time and All Eternities, she explores not only polygamy but the November 2015 exclusion policy in which the Mormon Church took an unforgiving stance against the LGBT community within its ranks. Linda, her husband, and sons show a modern Mormon family facing challenges that we all must face-- except for Linda's penchant for solving murders. While Linda investigates, she sheds light on her faith, helping non-Mormons understand what her religion is all about. Being acquainted with the Mormon lifestyle has given me a great appreciation of Harrison's books, although I am certain that the devout have given her more grief than she ever thought possible. It's what the devout of all faiths do.

Although the mystery is good in For Time and All Eternities, I thought it easily solved just by observing human behavior. Fan though I am of this series, I found this book to be too personal, that it dwelt too much on church matters. It's as though Harrison couldn't maintain a necessary degree of objectivity and it weakens the story she tells. There's no doubt about it. Mette Ivie Harrison is a very talented writer. She's also very brave for writing these books. I look forward to seeing what the future holds in store for her.