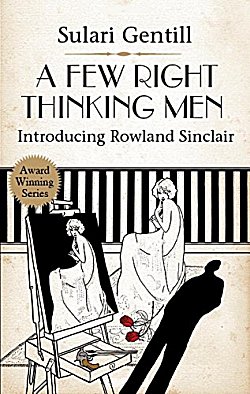 Rowland Sinclair is the third son of a very wealthy Australian family. The second son was killed in World War I, and the first son, Rowland's brother Wilfred, is in charge of the estate. It's 1931, and Rowland lives in Sydney, painting in his superbly tailored three-piece suits and handing out free room and board to his friends Edna (sculptress, actress, and sometime life model), Milt (poet and ardent Communist), and Clyde (a fellow painter). Rowland's money and laissez-faire attitude to politics have sheltered him from the mounting tensions spawned by the Great Depression, and his friends have him at odds with his very conservative brother.

Only his bachelor uncle is a kindred spirit, and when the elder Rowland Sinclair is brutally murdered, his nephew is determined to find his killer-- even if it means putting his own life in danger.

Author Sulari Gentill is absolutely brilliant at setting the stage for her first Rowland Sinclair mystery. Her historical and societal contexts bring this era in Australia to life-- and also shows eery similarities to the world today. She also establishes a stellar cast with Rowland, his brother Wilfred, sister-in-law Kate, and his friends Edna, Milt, and Clyde.

The only drawback to A Few Right Thinking Men is that Gentill concentrates so much on setting her stage that the mystery felt almost non-existent. It took a long time for Rowland to really get moving on his investigation into his uncle's death and the conclusion of it occurred behind the curtains, which always annoys me.

Be that as it may, I'm looking forward to reading the next book in the series. With a slight touch of Lord Peter Wimsey in his Harriet Vane days, this is a series that should easily appeal to fellow fans of Jacqueline Winspear's Maisie Dobbs and Kerry Greenwood's Miss Phryne Fisher.