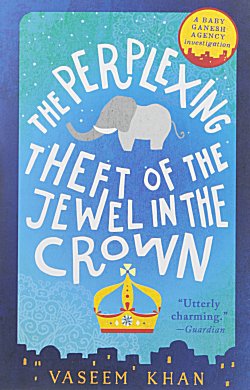 Gandhi may be Ashwin Chopra's hero, but the retired police inspector isn't above a daydream or two-- especially when he's knocked unconscious when the Koh-i-Noor diamond is stolen from the Prince of Wales Museum in Mumbai. The Queen of England, who put her jewels on loan for the exhibit, flies home immediately. The entire country of India is in an uproar, and no matter how hard the police are working to recover the stolen property, it soon becomes clear that there's only one man for the job: Inspector Ashwin Chopra (Ret.).

Vaseem Khan has written another enjoyable mystery in his Baby Ganesh series-- the only series I know of that has a baby elephant as a sleuth (and Ganesha does good work). In many ways, this series reminds me of Tarquin Hall's Vish Puri mysteries set in New Delhi. It gives readers the same wonderful cultural flavor (minus the mouth-watering food). If you love books that give a real feel for the climate and culture of another country, this is a series that you should enjoy, especially if you start with the first book, The Unexpected Inheritance of Inspector Chopra.

In this second book, there's so much work that needs to be done that Chopra has to hire another investigator. Rangwalla also worked on the Mumbai police force, and he's a person Chopra likes and trusts. While Chopra focuses on the jewel theft to clear the name of an old friend, Rangwalla is put to work with Chopra's wife, Poppy, to solve a series of crimes occurring at the school in which Poppy teaches. This leaves the young elephant Ganesha at home being cared for by young Irfan, a boy who also helps out at Chopra's restaurant. When Irfan disappears and disreputable people take advantage of the adults' absence to haul away Ganesha, a rather surprising (and endearing) hero rises up to save the day.

The mystery involving the jewel theft is engaging, and I'd say that the series as a whole is almost perfect... except for one area of blight. Chopra's mother-in-law, Poornima, is the darkness in this series. This woman lives to hate, find fault, belittle people, and cause endless trouble simply because she can. Thankfully the woman has a lesser role in this book than she did the first, but she's also been given a larger scope to do damage. I'd love to pick up the next book to discover that Chopra is working to solve Poornima's murder, but I fear the suspect pool would be insurmountable. Oops, I think my involvement with the characters and stories is showing!

Yours just might, too, if you give Chopra and his baby elephant a test read-- and I hope you will!