The Ice Limit by Douglas Preston and Lincoln Child 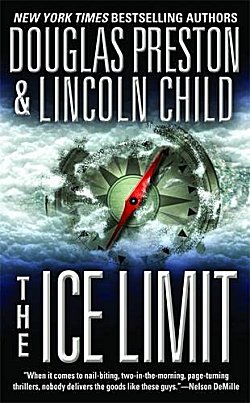 First Line: The valley that had no name ran between barren hills, a long mottled floor of gray and green covered with soldier moss, lichens, and carpha grasses.

When the largest known meteorite is discovered on a desolate island off the southern tip of Chile, billionaire Palmer Lloyd is determined to have it be the centerpiece of his new museum, regardless of cost. He hires a team of the finest scientists and engineers, puts them aboard a converted oil tanker, and sends them down to dig the meteorite out and bring it back.

But something isn't right. From the very first approach to the meteorite, people begin to die, and soon a question surfaces. Is the team taking the rock somewhere... or is it taking them where it wants to go?

I just plain flat out enjoy the writing of Douglas Preston and Lincoln Child, whether it be a Pendergast novel or a standalone thriller. When I'm in need of high-quality distraction, I know where to go. Well, I was in need, and The Ice Limit filled the bill.

The authors really gave me a feel for the weather and seas around Cape Horn-- and made me wonder how on earth those earliest of explorers ever made it through sailing their tiny wooden ships. I also found the logistics of transporting the huge meteorite fascinating, from digging it out of the ground to getting it aboard the oil tanker to beginning the journey home. Of course, there's a nasty villain threatening their very existence during the last half of the book, but his behavior is almost secondary to the weird goings-on surrounding the meteorite.

Thrillers aren't usually known for their characterization, but there were two characters in this book to whom I reacted. The most interesting was McFarlane, the meteorite hunter because his character did grow and change. I had a less favorable reaction to Glinn, the man in charge of the operation. I became very tired of him never explaining what he was doing. Yes, he was brilliant at his job, but when a magician pulls an endless number of rabbits out of his hat, he becomes boring.

On the whole, this book moves swiftly, and the story is engrossing. It also ends on a doozy of a cliffhanger. For those who can't stand unresolved issues, Beyond the Ice Limit became available this year. I think I'm going to have to find out what's going on with that meteorite!