The Surgeon by Tess Gerritsen 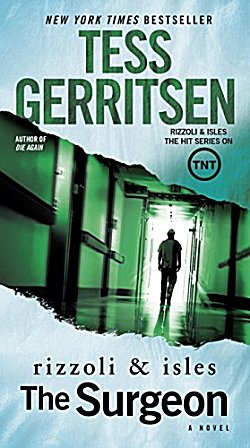 First Line: Today they will find her body.

Boston PD is racing to find a serial killer the newspapers have dubbed "The Surgeon" due to the precise way he works on his victims. During the course of their investigation, Detectives Thomas Moore and Jane Rizzoli find a victim of a nearly identical crime and hope that she can help them.

Two years ago Dr. Catherine Cordell fought back and survived her attacker's assault, but now The Surgeon is accurately recreating what she endured with each of his new victims. This monster is taunting her, and it's clear that Moore and Rizzoli have to move fast before Cordell is the next victim.

I've been putting off reading this series due to the Rizzoli & Isles television series, but it wasn't necessary. Like Longmire, the producers use the authors' works as springboards to new storylines, so both books and television series can be enjoyed.

I think the detail that threw me the most was the absence of Dr. Maura Isles, who isn't introduced until the next entry, The Apprentice. I had already been informed of the differences between literary Rizzoli and her TV counterpart-- and that's enough comparisons between the two mediums!

I have to admit that the serial killer part of The Surgeon was a tad old hat, but this was written in 2001 when he would've been much fresher. Watching the investigation unfold was fascinating; it took a lot of basic police work, dotting the i's and crossing the t's. Going back over the same ground until some small detail stood out and begged to be followed up on.

Due to Gerritsen's medical background, readers get an excellent feel for the protocol in hospitals and the split-second decisions that must be made in the emergency room. But the overarching theme of The Surgeon is women competing in what has always been considered a "man's world." Jane Rizzoli and Catherine Cordell both have cores of steel; they have to because of their occupations. Too many times women have been treated as victims, as a sex not worthy of being heard, only of being ignored, protected as something "lesser," or... of being disposed of. Tess Gerritsen makes readers feel every second, every ounce, of this injustice. It's this passion of hers, along with her fast-paced story, her fascinating characters, and her eye for detail that will keep me reading her books.