The Dead House by Harry Bingham 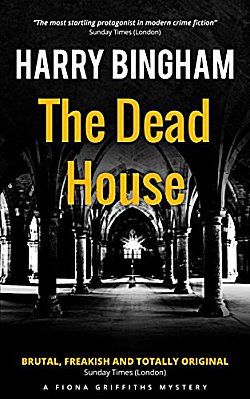 The corpse is in a remote location, with no marks of violence and looking very peaceful. But why is she there...why has no one reported her missing... and why is she wearing a thin white dress on a bitter October night? These are just a few of the questions that have Detective Constable Fiona Griffiths raring to take this case under her wing and solve it. She does like the unusual after all. And what could be more unusual than having a corpse without a crime and a second case that's a crime without a corpse? It's certainly worlds better than logging evidence and keeping all those spreadsheets neat and tidy for her superiors on the Cardiff police force.

What Fiona doesn't know is that she's putting herself in line to be the next victim, but who are we kidding? Even if she did know, she wouldn't mind a bit. It's not like she hasn't been dead before....

I have been luxuriating in Harry Bingham's Fiona Griffiths series since the very first book, Talking to the Dead. Bingham's hallmark precision plotting and the most fascinating character in all of crime fiction are two of the major reasons why I am hooked on these books.

Here in The Dead House, Fiona is as brilliant as ever, and she's found a new detective inspector to impress/bewilder. It takes a very special DI to both recognize Fiona's incredible intuition and indefatigable desire to see the job through... and to know how to work with her to use those talents without forfeiting one's rank and job. Our Fi isn't the easiest person to deal with.

If you are not a fan of caving, be forewarned: you're going to find yourself underground for extended periods of time. Since I do not "do" underground, I was feeling extremely jittery through these sections of the book (which means they are very well done).

One of the things I love about Fiona and about Bingham's writing is that you never quite know what to expect (other than a fantastic read). One of my favorite parts of The Dead House was when Fiona finds a way to bring in her sister the interior decorator so she can help a grieving father. The police forces of the world may not have Life Reassembly and Home Decoration Teams... but they're a wonderful idea. Fiona is usually in such grim situations that it's nice to read a touching-- and funny-- scene like this.

Through the first four books in this series, I have awarded each one an A+/five stars. I knew that, sooner or later, that rating streak would have to end, and it does here. The Dead House is a "mere" A/four-and-a-half stars because there were two things that were just a bit over the top for me. One was the medieval aspect of the mystery's solution which I can't say anything more about. The other occurred when Fiona calls a friend to come and witness a potentially dangerous arrest. But four A+'s and one A in five books? This means you really need to get your hands on this series and read each book, preferably in order because you need to know why Fiona is so unique.

You can thank me later.