Smoke and Mirrors by Elly Griffiths 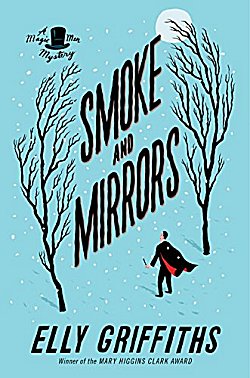 Two children have been found strangled to death in the woods in a scene horribly reminiscent of "Hansel and Gretel." It's the job of Brighton's Detective Inspector Edgar Stephens to find the killer, so don't expect him to be in the Christmas spirit-- even if his friend Max Mephisto is starring in a local production of Aladdin this holiday season.

Stephens has plenty of leads to pursue, many of them originating with Annie, the young murdered girl, who used to write gruesome little plays based on Grimms' Fairy Tales. It's difficult to deduce if the key to breaking the case lies in Annie's unfinished final script... or in the theater and the actors performing in Aladdin. Stephens enlists the help of his friend Max to put the killer behind bars.

As she did in The Zig-Zag Girl, Elly Griffiths takes us to 1950's Brighton, England and the slightly seedy world of the theater and magic and pantomime. It's a world I know very little about, so I enjoy learning about it through Griffiths' eyes.

Griffiths has created an excellent mystery, one that many times had me wishing I remembered more of Grimms' Fairy Tales, but (as usual) the real strength in this book lies in her characters. I found little Annie to be fascinating. She was such an interesting character that I thought she was wasted as a victim; I wanted to see more of her. We also learn more about the personal lives of Stephens and Mephisto, which will answer some questions readers may have.

I found the focus of Smoke and Mirrors to be much more in the present day and on Edgar and his investigation. I missed the spice that "more Max" gives to the action as well as talk of what the two men did during World War II, although I know the series can't get stuck back in that time frame. It will be very interesting indeed to see where the author's focus shifts to next as the series progresses.