Hell Bay by Will Thomas 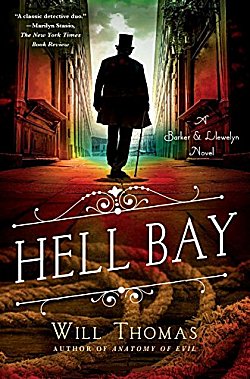 If there's one assignment that private enquiry agent Cyrus Barker does not like, it's one in which he must provide security for someone. But it's Her Majesty's government doing the insisting, so Barker and his young assistant Thomas Llewelyn head to the private estate of Lord Hargrave on a remote island off the coast of Cornwall.

The cover story for the house party is the introduction of Hargrave's two unmarried sons to potential wives, but it's really a secret conference with the French to negotiate a new treaty. However, once everyone is on the island people begin to die. The only way to get off-- a boat-- has been sent away, and the means of signaling for help has been destroyed. Everyone is trapped with no way to escape. Now Barker and Llewelyn must uncover which among them is a killer.

I found it quite refreshing to have Barker and Llewelyn trade their usual London haunts for a country house on a remote island in the Scillys. Hell Bay is Will Thomas's tribute to Agatha Christie. Trapping a group of people on a remote island and then killing them off one by one has definite overtones of Christie's And Then There Were None.

How well does the author do with a locked room (island) mystery? Very well indeed. I didn't have a clue who the killer was. All I could do was settle down, start learning about each one of the guests, observing their behaviors... and be thankful that there was no way I would wind up as one of the corpses.

Although very familiar with her stories, I am not an Agatha Christie fan, so I do not know how a fan would react to this book. I am, however, a Barker and Llewelyn fan, and it was a real treat to take these two out of their element and have them solve an extremely complicated and dangerous mystery on their own. Llewelyn's mystery-solving acumen grows with each new book, and Barker-- who has always been quite the iconoclast-- fits in rather well with the rich and those pesky government types. Who would have thought? I can't wait to see what these two do next!