The Good Cop by Brad Parks 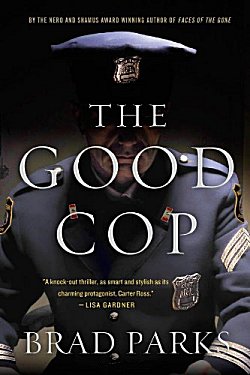 First Line: The exchange started with nothing more sinister than an ad on Craigslist.

It's not normal for reporter Carter Ross to be rudely awakened at 8:38 AM by a phone call from his boss. He turns his stories in on deadline, so he's used to strolling into the newsroom at 10 or 11. But his boss learned that a local policeman has been killed, and Carter needs to get the story.

Carter goes to interview the policeman's widow, and he knows he's onto something, but he's barely out the door when the boss calls again. Forget the story; the cop committed suicide. From what he's just learned from the man's widow, suicide simply does not make sense. There is a good story here, and with Carter Ross's patented stubborn devotion, he's going to find out what it is... even if his boss is demanding he finish up a different (snorefest) of an article.

There must be something in the water in New Jersey because a lot of good writers come from there. It's my personal opinion that Brad Parks is at the top of the New Jersey list. Does that mean he drinks more of the water? I don't know. I do know however that I want him to keep writing. Every time I pick up a Carter Ross novel, I know I'm going to learn more about working in a newsroom, I'm going to be presented with a mystery that's tough to figure out, I'm going to want to hug the stuffing out of Carter Ross, I'm going to laugh, and I'm going to cry.

One of the many things that's so great about Parks' Carter Ross books is his characterization. His characters are so finely drawn that you find yourself talking to them. Carter's immediate boss, Tina? I sincerely hope that woman's biological clock implodes.  She has some serious emotional issues. Then there's the other boss who only speaks in consonants. I'm scared because I can actually understand him without an interpreter. Then there are the interns. Tommy's got experience and Carter knows he can rely on Tommy for help with research... and putdowns about Carter's sense of style. In The Good Cop Carter has his hands full with another couple of interns, especially Ruthie. I like to see how he uses these bright-eyed, bushy-tailed young ones to work the system while giving them badly needed training and (when warranted) encouragement.

Random chapters told from the point of view of the Bad Guy keeps readers wondering how two different story lines are going to converge while Carter's list of underworld contacts just keeps growing (and making readers laugh while it does). Don't be fooled into thinking that Brad Parks plays everything for laughs. He does not. He can write action scenes that will have you mentally ducking and covering, other revelatory scenes that will have you quivering with rage over injustice, and then there are those scenes that will have tears running down your face. Sometimes those tears will be ones of sorrow; other times they will be tears of laughter. Carter Ross has more heart than just about any other character I know. These books are so good that I'm savoring them like fine wine. Yes, I could gulp them down one right after the other, but... I don't want them to end so I'm taking my time.

If you haven't made the acquaintance of Carter Ross, I highly recommend that you do so. He is one fabulous guy.