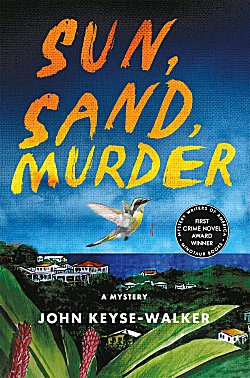 First Line: Walking along the water's edge, the killer thought about the gun.

For twenty years, Teddy Creque has been the Special Constable on the island of Anegada in the heart of the British Virgin Islands. For twenty years he's had nothing to investigate and no reports to file, which is a good thing since he and his wife have to juggle multiple jobs in order to raise their children.

All this tranquility comes to an end when Teddy receives a report about a dead man on the beach. The dead man is biologist Paul Keliher who did research on Anegada every winter. When the British Virgin Islands' "real" police show up, Teddy is removed from the investigation and told all he can do is notify Keliher's next of kin of the man's death. But when Teddy does he learns that Paul Keliher never existed. Now Teddy has something he can really investigate-- even if his boss doesn't want him to-- because he wants to show them all that he isn't a failure as Special Constable. It's not going to be easy to balance his investigation with his other jobs and his complicated family life, but he is determined to solve the case.

There is something about Teddy's homelife that made me wonder if I was going to like this book, but John Keyse-Walker swiftly drew me into his story by bringing the people and the tiny island of Anegada to life. The landscape, the weather, how the people live, the food they eat... everything combined to put me right on the beach with them. I love it when that happens.

Teddy is not always a likeable character, but he's always interesting. For twenty years, he's had it relatively easy. His wife makes sure everything at home runs smoothly. His job as Special Constable basically means driving around from beach to beach, chatting with the residents, and occasionally dealing with someone who's had too much to drink. His other jobs are even less taxing. But all that changes when Paul Keliher is murdered, and it's interesting to see how Teddy changes once he's finally got something important to do.

Investigation isn't his forte-- he's never had to do it before-- and the author gives him a very intriguing one to solve. Although Keyse-Walker does make a couple of rookie mistakes in this first book (which I won't go into because I don't want to give you any help in identifying the killer), I found the mystery kept my interest throughout the book because there is so much more to it than just pointing a finger and saying, "You did it."

There are also some good secondary characters, but if this is the first book in a series (and I sincerely hope that it is), the author does need to beef up the cast a bit. All in all, I was very impressed with Sun, Sand, Murder, and I'm hoping to read more books by John Keyse-Walker. Bring 'em on!