An Obvious Fact by Craig Johnson 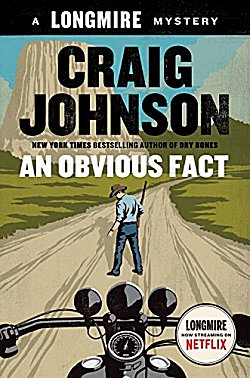 First Line: I tried to think how many times I'd kneeled down on asphalt to read the signs, but I knew this was the first time I'd done it in Hulett.

Sheriff Walt Longmire and his friend Henry Standing Bear have gotten a call from the sheriff in Hulett, Wyoming. Their help is needed on the case of a young man who's now in critical condition in the hospital. Was he run off the road? Why? Who did it?

It just so happens that the largest motorcycle rally in the world is being held in Sturgis, South Dakota-- just a stone's throw from Hulett-- and with all those bikers in town, things rapidly start getting interesting for Walt and Henry. But it's not just the bikers giving those two grief. Competing gangs, the Bureau of Alcohol, Tobacco, and Firearms, Hulett's very own MRAP (mine-resistant ambush protected vehicle), and Lola Wojciechowski-- THE Lola for all you Craig Johnson fans-- are just a few of the people and things making this an extremely complicated investigation. And to make Walt's day complete, Henry just will not stop quoting Sherlock Holmes. What's a sheriff to do but solve the case and get back to Absaroka County as fast as he can?

I absolutely love An Obvious Fact. Just looking at the cover puts a big smile on my face. Almost every single character we've grown to know and love makes an appearance here. Daughter Cady phones hers in, but it serves to make us wonder if Walt is finally going to break down and get himself a cell phone. Henry has plenty to do especially with Lola around, and Dog makes his presence known on more than one occasion. But the character that brings the most to this banquet table of a book is Vic Moretti. I refuse to tell you what all she gets up to, but--trust me-- it's marvelous!

This is another of Johnson's first-rate mysteries. Your kinder, gentler side does get involved occasionally because you just can't have a main character who's described by Vic as a "detective for the disenfranchised" without bringing those heartstrings into play, but the humor is what I loved the most. Be prepared to laugh. A lot. Not many writers can do dialogue like Craig Johnson.

I could go on for page after page about how good An Obvious Fact is, but I won't. What I will say is that-- if you haven't read any of these Walt Longmire mysteries-- get your hands on the very first one, The Cold Dish. Start reading. You'll be hooked and itching to get your hands on all the rest of the series. I read a lot of mysteries, from the coziest of cozies to the hard-boiled detectives. I have several favorite series that I keep up-to-date with. But truth be told, Craig Johnson's Longmire mysteries are at the very top of my list. I'm already chomping at the bit for the next installment.

Oh, I almost forgot. You know that dumpster in Scottsdale, Arizona that you mention in An Obvious Fact, Craig? I park right by it every time I visit my favorite bookstore. You do know how to make a woman laugh!