The Guise of Another by Allen Eskens 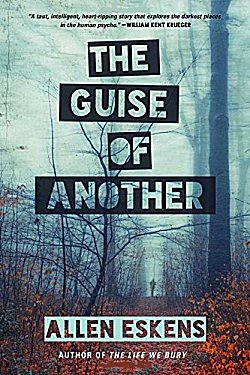 First Line: That night, there were a few things that the man knew to a religious certainty.

How the mighty have fallen. Alexander Rupert, a decorated Minnesota police detective, is under suspicion of corruption and has been transferred to the Fraud Unit where everyone shuns him. To top it all off, he suspects that his wife is having an affair.

When a lawyer brings him evidence of identity theft, Alex latches onto it as an opportunity to redeem his battered reputation. What he doesn't realize is that he's just put himself into the path of a trained assassin, and even his big brother Max may not be able to save him.

The only thing that ties The Guise of Another to Allen Eskens' first book The Life We Bury is the presence of Max Rupert, but this book is younger brother Alex's show-- and it's a scary one. A dead man happens to have used a stolen identity. When Alex starts looking for the man's true identity, up pops an assassin, a veteran of the Balkan wars, who will stop at nothing to accomplish his goals.

The pace is swift, and readers' minds will fill with questions: Who's doing what? Why are they doing it? Who can be believed? Eskens ties all these questions to another masterful characterization. The more readers learn about Alex Rupert, the more they will wonder what, precisely, is going on. Because Alex is a master of revealing very little. Once everyone treats you with suspicion, you learn to keep things to yourself. But being one man against the world isn't a good thing when an assassin is headed your way.

I enjoy the way Eskens writes. The pacing, the setting, and the action are all vivid, and he has a way of getting into his characters' heads that draws the readers right in, too. I'm looking forward to his next book.