The Age of Doubt by Andrea Camilleri 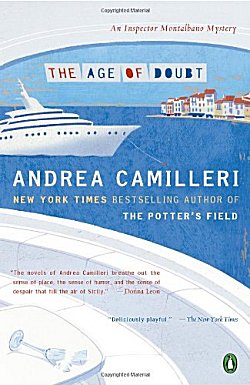 First Line: He had just fallen asleep after a night worse than almost any other in his life, when a thunderclap as loud as a cannon blast fired two inches from his ear startled him awake.

That thunderclap heralded a ferocious storm. Unfortunately Montalbano didn't know the road to work had collapsed before he left his house the next morning. Stuck in terrible traffic jam, he manages to save a plain young woman who was trying to meet someone arriving on a yacht that day. Not long after she leaves, Montalbano discovers that the very same yacht has just reported finding a disfigured corpse. Also at the dock is a luxury vessel with a questionable crew. Everyone's going to have to stay put until Montalbano's investigation is over, but never fear: this veteran police officer is a magician at putting strange clues together in such a way that they lead straight to the bad guys.

The Age of Doubt is one of Andrea Camilleri's most enjoyable mysteries featuring the irascible Inspector Salvo Montalbano. Someone successfully cons him which simultaneously alarms and amuses him. He has a tough time identifying the dead man brought in on the yacht. And a good mind for geography is needed to piece together what those two vessels are doing in the harbor at Vigáta. It's all enough to make Montalbano doubt his abilities-- especially when he starts speaking in clichés.

The book also has Camilleri's trademark humor that can easily have me laughing out loud, as in scenes when Montalbano is desperately trying to get something done and no one cooperates. One can never say enough about Stephen Sartarelli's superb translations of these books, and the food? When's the next plane to Sicily-- I'm starving! There was only one small blighted spot in The Age of Doubt concerning something that is expected of Montalbano's married detective, but it's not about to spoil my enjoyment of wonderful series. Long live Salvo Montabano!