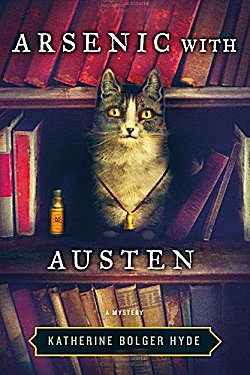 First Line: A gentle late-spring breeze ruffled the tender leaves of the maple and cherry trees on Reed College's front lawn, flirted with the skirts of the graduates' robes and tugged at the edges of their mortarboards, then swirled up three stories to tease Emily's upswept hair as she stood at her open office window.

When fifty-one-year-old Emily Cavanaugh inherits a fortune, her first thought isn't of spending it all. Instead she goes to Stony Beach, Oregon, to live in her late aunt's wonderful old Victorian home that's chockful of nooks and crannies. Emily has not only inherited the house called Windy Corner, she now owns a large portion of the entire town's real estate. There's a clandestine plan in the works to develop Stony Beach into a major resort, and little does Emily realize that her inheritance is needed for the plan's success.

Emily knits and reads Jane Austen's Persuasion while getting to know the town's quirky inhabitants and getting reacquainted with her longlost love, Sheriff Luke Richards. It doesn't take long for her to hear rumors that her aunt might have been murdered, and when another suspicious death and her own near-fatal accident occur, those rumors would certainly seem to be confirmed. The more Emily helps Luke with the investigation, the more she discovers that there is enough festering resentment in Stony Beach to shock even Jane Austen herself.

For the most part, Arsenic With Austen is a very enjoyable read. The author has created main characters that are both likeable and interesting. Emily in particular shows that she is not the usual inheritor of a fortune by the way she goes about dealing with the money and property she now has at her disposal. Much of her character is revealed in how she treats the other residents of Stony Beach.

The identity of the killer is rather obvious here, but it's the motivations that are at the heart of the mystery. One thing that did startle me however was the sudden religious piety that appeared at the end of the book. Yes, Emily behaved as a true Christian would throughout the book, but to start talking a great deal about God and concepts like divine pity when nothing like this had ever been spoken of before was jarring. It made me wonder if too much editing (or not enough) had been done.

Be that as it may, I did enjoy Arsenic With Austen, and I'm looking forward to seeing what happens in the next Crime With the Classics mystery.

Cozy Mystery, #1 Crime with the Classics mystery
Rating: B+
Source: the publisher