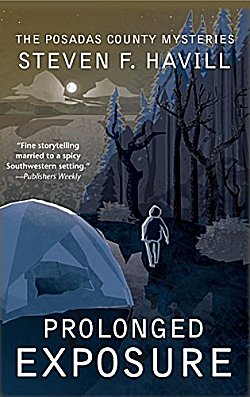 First Line: The late-afternoon sun angled across the sweep of the bunchgrass prairie, casting harsh shadows around mesas and on the lowlands where arroyos cut the sand into fantastic patterns.

Bill Gastner is recuperating from heart surgery at his daughter's home in Michigan, and his dreams are filled with green chiles and the wide open spaces of New Mexico. A phone call gets father and daughter on a plane back to the land he loves. A young boy has vanished from Cat Mesa. Gastner's house has been burgled. An old man has borrowed a piece of the Undersheriff's land to bury his wife, and the dead woman's stepson wonders if the old lady died of natural causes. Cases to investigate, people to question, and a plate full of Mexican food is sure to put Gastner firmly on the road to complete recovery. Well... maybe not that plate of food if his daughter has any say in the matter!

Steven F. Havill has one of the best mystery series going. There's not an ounce of flab on any of them. The mysteries are intriguing and well-paced, and the cast of characters is marvelous-- growing and changing as time passes. Add genuine Western flair and the scenic landscape of New Mexico, and you've got it all... green chiles optional but definitely preferred.

Bill Gastner talks slow, thinks fast, doesn't sleep much, and knows Posadas County and its people like the back of his hand. I love watching him solve each case with a blend of good old-fashioned common sense and a bit of technical know-how. Havill's splendid cast includes Deputy Estelle Reyes-Guzman who couldn't be more different from Bill yet is just as talented and dedicated, Estelle's doctor husband and their young son, and other members of the Posadas County Sheriff's Office. These people are bound together by the job and by their real caring for each other. They may not be equally skilled, but that just makes the "family" dynamic more interesting.

Prolonged Exposure-- and all its siblings in this series-- is so good that I wish everyone would give it a try. It's probably all right to start wherever you like since Havill does provide necessary details, but since the characters' lives play such an important role in the books, it would probably be best to begin at the beginning with One Perfect Shot so you can savor each and every bit... like I've been doing. I doubt very much that you'll be disappointed... unless you're one of those city slickers I've heard tell about.