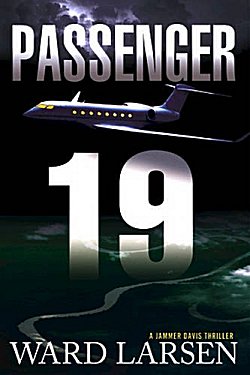 Having spent most of his life investigating aircraft accidents, Jammer Davis is used to coming face to face with tragedy. But when a small jet disappears over the jungles of Colombia, Davis finds that this accident is something completely different: his daughter is listed as being on board the missing plane.

Davis rushes to Colombia, and when the wreckage is found, it is clear that no one could have survived the crash. Once his investigation gets into high gear some interesting facts come to light. The two pilots and one of the passengers had been shot to death before the crash... and the remains of two passengers cannot be found.

The more Davis investigates, the more he uncovers-- including a plot that reaches back to the U.S. government. But how on earth could his daughter possibly be involved?

This third book in the series is the first Jammer Davis mystery that I've read, and I'm happy to report that the transition into the story was effortless. No questions, no confusion. Davis is a good blend of logic and brute force, and both elements come into play in this story involving his young daughter.

I learned quite a bit about different kinds of aircraft and investigating crash sites, and everything was perfectly geared toward readers who don't have a clue about these things: light, to the point, and very interesting. There were even touches of humor throughout the book, which were needed in such a serious story.

Jammer Davis is a well-drawn character who will definitely make me come back to this series, especially since Passenger 19 also has an engrossing plot that really picks up speed once Davis has enough clues to begin piecing together what happened.

After enjoying this book, I think I'll take a look at the other Jammer Davis mysteries. Good stuff!