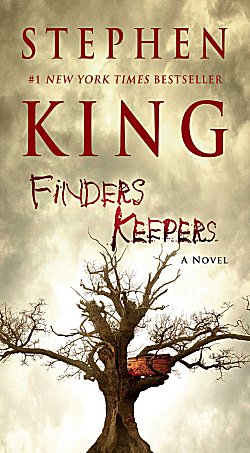 In prison for murder, the only thing that keeps Morris Bellamy going is thinking of the stash of his favorite author's notebooks he has squirreled away. You see, Bellamy committed one more murder than the authorities know about. He killed his favorite author, John Rothstein, because Bellamy believes the main character in Rothstein's famed trilogy sold out. The money in Rothstein's safe meant little to Bellamy; those piles of notebooks were the true mother lode because-- although he stopped being published-- Rothstein kept writing, and Bellamy knows that there's at least one more book featuring his favorite character in those handwritten pages.

Thirty-five years later, Bellamy is back on the streets and can't wait to get his hands on those notebooks. What he doesn't know is that young Pete Saubers has already found Bellamy's treasure. The only thing standing between Pete and Bellamy's rage is Bill Hodges' detective agency, Finders Keepers.

Mr. Mercedes made it to my Best Reads list, so I was eager to reacquaint myself with Bill Hodges, Holly Gibney, and Jerome Robinson in Finders Keepers. At first I kept waiting for those three to make their appearance, but I quickly fell into the story and stopped missing them. By the time they were ready for some real action (roughly halfway through), I welcomed them with open arms because Morris Bellamy was giving me the creeps.

For some reason, certain characters kept reminding me of other things in this book. John Rothstein reminded me of J.D. Salinger, and not only did Morris Bellamy remind me of another of King's literary fans named Annie Wilkes, his physical appearance made me think of Pennywise... the character from It that put a face on my loathing of clowns.

It was good to see that Bill Hodges is doing better than he was at the end of Mr. Mercedes, and I really liked the dynamic between him and his two younger cohorts, Holly and Jerome. They're good for each other. King has always had a knack for creating marvelous young characters, and Pete and Tina Saubers continue this tradition. Everything Pete does in order to salvage his parents' marriage is heart-breaking, especially when you know that it is bound to come crashing down around his ears. Pete is a sharp kid, but there's no way he has the experience to deal with someone like Morris Bellamy. And... lurking in the background... is the psychopath from Mr. Mercedes, Brady Hartsfield. He's come out of his coma but is still in a vegetative state... or so everyone in the hospital thinks. (Any Stephen King fan worth his salt knows better.)

Once again-- good storytelling, some marvelous characters, and a feeling of growing dread that sets us up nicely for the last book in the trilogy: End of Watch. It will be interesting to read that third book. Mr. Mercedes was a murder mystery. Finders Keepers is more of a literary thriller. Where will we be taken next?

Stephen King may show us the crazy side of life, but it's not all that far-fetched when compared to what's really going on in the world today. He's more than capable of scaring the living daylights out of us, but he also reminds us of something important: how good humans can be.