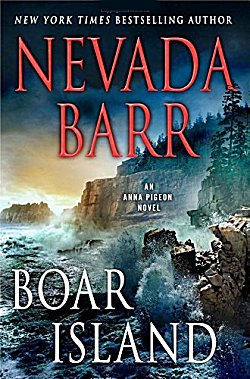 First Line: Fists white-knuckled on the crutches, sweat running into her eyes, Heath grunted like a sumo wrestler.

When Heath Jarrod finds her adopted daughter Elizabeth in the midst of a suicide attempt, she calls in the cavalry-- her Aunt Gwen and her friend Anna Pigeon. Anna has had to deal with quite a lot throughout her career, but cyber-stalking and bullying is alien territory. The three adults think it best to take Elizabeth away from her stalker, and since Anna is about to assume her temporary post as Acting Chief Ranger at Acadia National Park in Maine, the other three follow her and stay in a house on Boar Island.

But the move does not solve the problem. Elizabeth's stalker has followed them east, and Heath, Elizabeth, and Gwen are not alone on their small island. Anna also has a big distraction on her hands: a violent murder has been committed by a killer who's uncomfortably close to her.

I've been a fan of Nevada Barr since the first book in the series, Track of the Cat, but this one is not one of her best. For one thing, the setting of Acadia National Park was a bit of a stretch, and it never really came to life as other parks have under Barr's tender loving care.

It was certainly good to see paraplegic Heath Jarrod and her adopted daughter Elizabeth again, as well as their dog Wiley. In many ways Heath is Anna in a wheelchair: prickly and opinionated, an animal lover with the heart of a lion who enjoys her own space and doesn't know how to quit. When spending time together with Heath, Gwen, and Elizabeth, Anna finds herself examining the choices she's made in her life and how well she fits in this small family group. Readers also get to see that time is beginning to catch up with Anna; in fact, she loses a bit of her super woman status (and not just because Heath is the larger focus of the book).

Two mysteries fuel Boar Island: Elizabeth's cyber-stalker and the killer who's running loose in Acadia National Park. For the most part, the focus is on the killing and two women-- Denise and Paulette-- with close ties to the murder victim. With the emphasis on the murder, this means that the second mystery concerning the cyber-stalker is put on the back burner and loses much of its suspense and tension. In fact, I forgot about it most of the time.

By book's end I was wondering where Barr had misplaced her magic fairy dust that she's so often used to lift her books head and shoulders above the rest. That dust that makes her story so real that I'm literally cheering Anna on in her latest battle. It may be missing here, and this book may not be one of the stronger ones in the series, but I will always be on the lookout for the next Anna Pigeon mystery. She's family.