Wound Up in Murder by Betty Hechtman 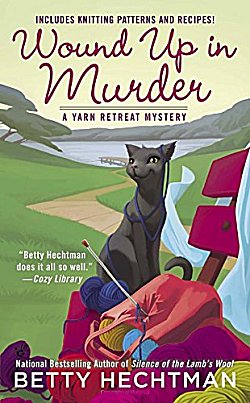 First Line: "This time it's going to be different."

Casey Feldstein has been in charge of two yarn retreats now, and she finally feels like she has a grip on the business. But there's no time to pat herself on the back-- a woman attending another retreat at the same resort is murdered, and Casey finds her body. Worse yet, Casey's ex-boyfriend Sammy is Suspect #1. She and her friends have a lot of work to do to prove the hapless Sammy is innocent.

One of the things I enjoy the most about Hechtman's Yarn Retreat cozy series is that readers get a good feel for the business of conducting these things. Not only that, but we can watch Casey commit several beginner mistakes and actually learn from them.

In Wound Up in Murder, Casey's instructors work together like oil and water, and her "early bird" friends take up so much slack during the retreat while Casey is off investigating that I actually missed the knitting parts that were in the first two books in the series.

Casey does have a bit of background in the private investigation business, which I like. Not only does she have a murder to solve, she's also trying to identify the possible heir to a local fortune. She's the amateur sleuth with the heart of gold (bringing an elderly woman out of her shell) who just so happens to bake tasty treats that will make your mouth water and your tummy rumble.

Hechtman has a solid, enjoyable cast of characters, and both mysteries are strong ones. The only thing that makes me slightly nervous is that Casey is in the middle of a love triangle with two handsome, eligible men in town. I swore off love triangles when I stopped reading Janet Evanovich's Stephanie Plum mysteries, so I hope this one is resolved. Quickly.

In the mean time, I find Betty Hechtman's setting, characters, and mysteries-- which are leavened with yarn and chocolate-- irresistible!