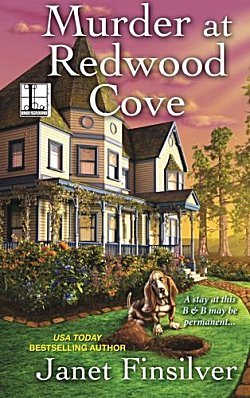 First Line: What a horrible way to die-- falling forty feet and landing on jagged rocks in the swirling ocean.

Kelly Jackson's first job as executive administrator for Resorts International is to take Bob Phillips' place running the Redwood Cove Bed and Breakfast. It's a job she could love... if it weren't for the fact that Phillips fell off a cliff to his death. Or did he?

Kelly begins to have doubts about Phillips' death, and even though she has her hands full with the B&B's annual Taste of Chocolate and Wine Festival, she finds herself working with a group of senior citizens who call themselves the Silver Sentinels. They don't think Bob's death was an accident either, and when Kelly is attacked and another body turns up, it's obvious that they were right to dig a little deeper. But can they find the killer before anyone else comes to harm?

I was really impressed by a presentation author Janet Finsilver did during Left Coast Crime, and I just couldn't resist buying a copy of her first Kelly Jackson mystery set in northern California. Murder at Redwood Cove is every bit as good as Finsilver's talk.

The northern California setting is put to good use in this book, and I also learned a bit about running a bed and breakfast as well as a foodie festival. In fact, by book's end I was wishing I could book a room at the Redwood Cove B&B.

Finsilver has assembled a strong, interesting cast, led by Kelly Jackson, a young woman who's smart, sassy, brave, and definitely not lacking in common sense. She wants to solve the mystery, but first and foremost in her mind is the safety of everyone involved. That's such a refreshing change from heroines with out-of-control curiosity. The retired "posse" calling themselves the Silver Sentinels are good folks to join an investigation because they each have their own special skill set-- even if it's sometimes just being in the immediate vicinity to keep an eye on someone who's in danger.  Old folks just blend into the woodwork, don't you know?

Another part that I really appreciated in this book was the young boy Tommy and his basset hound Fred. Even though Fred was considered to be a reject from a class that works with dogs to show them how to detect cancer, he's the best sort of buddy for Tommy, who feels like a bit of a reject himself. After finishing Murder at Redwood Cove, I had a big smile on my face, and I had to see if there was another Kelly Jackson mystery available. There is.  Murder at the Mansion, and it features two beagles trained to sniff out bedbugs and termites.

I like dogs with special abilities being featured in the series, but that's not the only reason why I'll be reading the author's books. Janet Finsilver weaves a gorgeous location with an intriguing mystery and a strong cast into a book so enjoyable it puts a smile on my face. Give Murder at Redwood Cove a try. You just might be smiling, too.