Murder at the Loch by Eric Brown 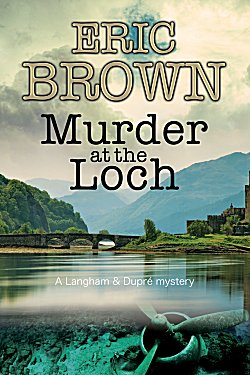 First Line: "And this will be your study," Maria said, opening the door and standing aside.

It's the bitterly cold December of 1955, and private detective Ralph Ryland has asked his writer friend Donald Langham to help him with a case. Their old commanding officer believes his life is in danger, and he wants the two of them to come to his remote castle in the Scottish Highlands. At first Langham is reluctant. He's not a private investigator after all, but in the end he is persuaded. It is for his old commanding officer, and the extra money will come in handy for his upcoming marriage to Maria Dupré.

Once settled in at the castle, it doesn't take the two men long to deduce that Major Cartwright is indeed in danger. Then a blizzard strikes. No telephone. No way out... and then the major's guests start to die. Ryland and Langham have to work fast to find a killer before the body count continues to rise.

If you are a fan of classic Golden Age mysteries, Murder at the Loch should be your perfect cup of tea because it has just that feeling about it. The puzzle is the thing, as it usually is with books originally written during that period. I, on the other hand, tend to prefer my crime fiction with more characterization added to the mix. This book is well written and has a good, fast pace to it, but I found it rather easy to deduce the identity of the killer, and-- ultimately-- the book just wasn't very exciting.  But as we all know, your mileage may definitely vary!