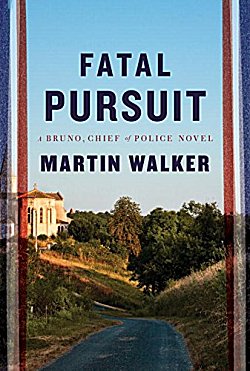 First Line: The lunar calendar said that the new moon made this a good day to plant broccoli, lettuce and cauliflower, just as the previous days of a waning crescent moon were said to be the time to weed and to start a new compost heap.

The things Bruno won't do for the village of St. Denis! It's time for the annual fête, and Bruno reluctantly agrees to be a last-minute replacement navigator in a car rally race. A classic car parade and the race are new editions to the celebration, and the mayor wants everything to go well.

Not only do the new additions bring crowds and those with big money and egos to match, it also brings the tale of an extremely rare Bugatti Type 57C which was lost somewhere in France during World War II. One of only four ever made, the car would be worth millions if it's found. But Bruno has even more to worry about than surviving a high speed race. When two deaths occur, it appears that international crime has reared its head in St. Denis... and an attractive Parisienne come home to settle a land dispute has turned Bruno's head.

Long one of my favorite series, Martin Walker's Bruno, Chief of Police mysteries could be guaranteed to make me speak with a French accent while hungering for the meals so lovingly prepared in the village of St. Denis. Unfortunately some of the sparkle is wearing off this series. Bruno is becoming a bit stale and formulaic. There will be a current crime that ties into a bit of French World War II history. Bruno will go out riding with his basset hound following along. Bruno will long for a committed relationship and often find a pretty woman to turn his head. There will be food. There will be wine.

While interesting, the scenes involving the car rally and the Bugatti really didn't grab my imagination-- and I love old classic cars. It really is time for Bruno to settle down because it's come to the point where I have to refrain from rolling my eyes whenever a new woman is introduced. Old flame Isabelle, busy with her high octane career, even has time to pay a visit, and she spends most of it being catty about any woman Bruno happens to look at. (Don't like it, Isabelle? Then you should've stayed.)

I have to admit that the most interesting part of the book for me was Bruno's helping young Felix who's being hounded by Tristan the bully. This subplot ties into the main thing that has made this series so good. Bruno shows over and over again that the best crime prevention involves knowing the people who live in your jurisdiction, being involved in community events like celebrations and sports clubs, and working with government officials to make the village a good place to live. It's a model that works well for Bruno and St. Denis, and it's a model that would work well anywhere.

Fatal Pursuit is a good, solid book. It's just not got the joie de vivre of the earlier ones. I'm hoping that Walker can shake things up a bit next time.