The Bad-Ass Librarians of Timbuktu: And Their Race to Save the World's Most Precious Manuscripts by Joshua Hammer 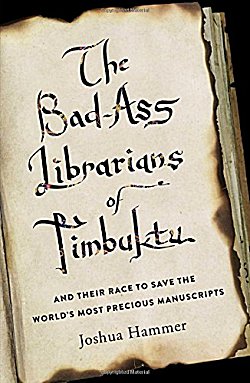 First Line: He shifted nervously in the front passenger seat of the four-wheel-drive vehicle as it approached the southern exit of the city.

In the 1980s young Abdel Kader Haidara journeyed across the Sahara and along the Niger River in order to collect ancient Islamic and secular manuscripts for a government library. Little did he know that this would turn into a lifetime's work and obsession.

Then in 2012, thousands of Al Qaeda militants seized control of Mali and Timbuktu, where Haidara had amassed tens of thousands of priceless manuscripts. Al Qaeda committed many atrocities, and they threatened more than once to destroy these manuscripts. Time was running out, and Haidara did the only thing he could: gather up all the manuscripts he'd so painstakingly collected and restored and smuggle them out of harm's way.

With its title, I just had to read this book, especially since I'd already read about Timbuktu's  ancient and storied history and its devotion to writing and knowledge. The sections about Timbuktu's history, of Abdel Kader Haidara's canny and careful forays into the desert, and of his smuggling them away from the very real threat of destruction are absolutely wonderful. I couldn't get enough of reading about a society that measured wealth in terms of books and knowledge, or about a man who was willing to spend his life gathering together and restoring such treasures.

Although completely necessary to the book, I did find that it bogged down in the politics. Who did what to whom. Who should've done this. Why this group moved here. It was eye-crossing after a while, but I soldiered through so I could thoroughly appreciate what Haidara and other people did.

Not many people would risk their lives to save a library, no matter how precious it was. We should all be thankful that men and women like Abdel Kader Haidara exist, and I for one am thankful that Joshua Hammer told their story.