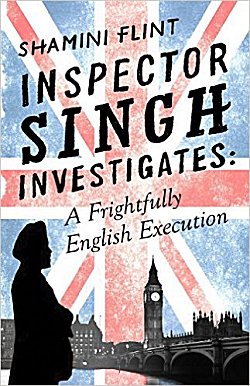 If Inspector Singh were asked to describe hell, he'd probably say hell was being forced to attend a policing conference in London while being accompanied by Mrs. Singh who wants to shop and visit relatives. A long flight, his wife's plans, the expectations of horrible food, not being allowed to smoke in most places... what could possibly make this worse?

Singh really should learn not to ask such a question because it will always be answered. As part of his duties during the conference, he is paired with a young female officer on the fast track to promotion, and they are given a cold case to follow up on. Five years have passed, and Singh and his partner are supposed to visit the victim's family to ask if there are any complaints about how the officers handled the case-- in particular if the police were sensitive to their culture and beliefs. It's a nightmare for Singh who has never been known for his diplomacy... until certain things in this cold case catch his attention. The best way to stamp PAID IN FULL to this case is to solve it, and that's exactly what the portly policeman in the blindingly white sneakers sets out to do.

I've loved this series since its inception (A Most Peculiar Malaysian Murder). Inspector Singh's boss hates him but can't fire him because Singh has the highest rates of solved crime in all of Singapore. Instead, Singh is sent out to as many conferences or loaned out to as many other police organizations as possible. I've willingly followed on all of his adventures because watching this grumpy man solve crimes is so much fun, and while I'm having fun Flint has acquainted me with several Southeast Asian settings (perfect for the armchair traveler).

In A Frightfully English Execution, we not only get to watch Singh compare London to Singapore, we get to witness Mrs. Singh become interested in his cold case investigation and help him with it. Is she actually becoming interested in what her husband does for a living? Even though it makes me suspicious, it's refreshing to see a character like Mrs. Singh begin to behave a bit differently. Some of the best parts of this book are the interior monologues Inspector Singh and his wife have. These monologues contain truths, and they are very often hilarious. They are just like the uncensored thoughts you and I have and do not share with anyone else.

A cold case with possible ties to terrorism? Characters who do not behave the way you expect them to? A plot that is a convoluted (but not confusing) delight? Shamini Flint has written another wonderful mystery, and I'm looking forward to the next time I see my old friend Inspector Singh.