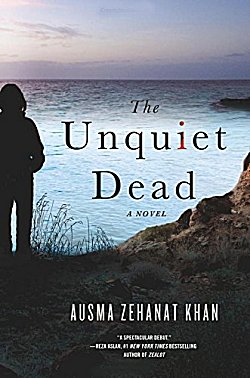 First Line: Esa Khattak turned his head to the right, offering the universal salaam at the conclusion of the evening prayer.

Detective Rachel Getty knows something isn't right when her trusted boss Esa Khattak asks her to look into wealthy Christopher Drayton's death-- and then scarcely says another word about it. Khattak's team handles minority-sensitive cases, and Drayton's case doesn't fit. Then she learns that Drayton may have been a war criminal with ties to the Srebrenica massacre of 1995. The ramifications are huge, and now she understands why Khattak has been tip-toeing around.

If Drayton was a war criminal, the suspect list could be huge, and the murder investigation itself could have lasting effects throughout the community. It needs to be solved, and solved quickly.

I do not find it strange that Ausma Zehanat Khan chose the framework of a crime novel to write this haunting story of the atrocities carried out in Bosnia. What is crime fiction but the quest for justice? Scattered throughout the book are quotes from survivors' testimony to what happened all along the route to Srebrenica where so many innocents were massacred. These quotes become the Greek chorus of The Unquiet Dead. They serve to remind us how important it is to prove whether or not Christopher Drayton is a war criminal in order for true justice to be done.

As far as I'm concerned, Rachel Getty is the star of this book. Her abusive father, her runaway younger brother, her intelligence and drive-- all of this has come together to turn her into a good, intuitive police officer. I want to see more of her. On the other hand, I didn't much care for her boss, Esa Khattak. As seen here in The Unquiet Dead, Khattak's head is much too easily turned by a pretty face. Since at any given point in time females can make up at least 50% of a suspect list, that's a handicap I'd rather a major character not have. And speaking of Khattak's little foible, there are two important female secondary characters whose portrayals border on caricature.

But as irritated as I was with Khattak and those two women, I was immediately pulled right back into the story by Rachel Getty and Ausma Zehanat Khan's Greek chorus of voices. I have read books before where the dead were supposed to speak, supposed to cry out for justice, but this is the first time for me that they actually did. These voices horrified me. They made me weep. They made me despair-- once more-- for the human race. And they made me demand that Rachel Getty and Esa Khattak find them justice.

This is an unexpectedly powerful book that has me looking forward to the next in the series, The Language of Secrets.