The Travel Writer by Jeff Soloway 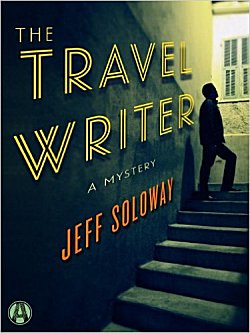 First Line: The Hotel Matamoros, the Xanadu of the Andes, the super-resort that had risen up like Kubla Khan's pleasure dome within the Bolivian tropics, was built to withstand earthquakes, mudslides, and drug lord assaults, but not scandal.

An American journalist has gone missing at a swanky resort in South America, leaving the resort's public relations agent with an international incident on her hands. She has no alternative but to call on her ex-lover, travel writer Jacob Smalls, for help. Lured by an all-expenses-paid trip to the resort, Jacob is more than happy to write an article telling vacationers how wonderful the place is, and he doesn't mind doing a little checking to see if he can find out what happened to the missing journalist. What he didn't realize is that he would be attracting all the wrong sorts of attention-- even some of the deadly kind.

I tend to be an armchair traveler when I read, so when I learned that The Travel Writer was set in Bolivia and it sounded intriguing, I had to have it. Unfortunately the story failed to deliver.

Yes, I did learn some of the ins and outs of being a travel writer, and I did find that interesting. I also appreciated learning a bit about Bolivia and its people. Even though I never really cared what happened to the missing American woman, I did deduce what was going on. But the coup de grâce was the fact that I found the main character to be too irritating for words.

Jacob Smalls is in the travel writing business for the free travel perks, and although he makes himself sound as though he has very few scruples, he doesn't behave like a sleaze. No. Instead he spends most of his time either cowering in fear or being condescending to most of the other characters. I've never cared much for cowering and condescension. Puts me in a foul mood.

Even though there was knowledge to be found and Bolivian ambiance to be savored, I just couldn't warm to the main character enough to want to continue any further in this series. Your mileage could definitely vary.