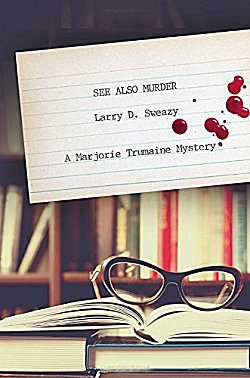 First Line: I saw a plume of dust through the window over my desk, and something told me trouble was heading my way.

After her husband is paralyzed and blinded in a hunting accident, there's just not enough money to pay the bills. It's 1964 up in North Dakota farm country, and after taking a course, putting in some hard work, and having a tiny bit of luck, Marjorie Trumaine is a professional indexer. It still doesn't bring in enough money to cover all the bills, but at least she can stay on the farm and take care of her beloved husband.

When her closest friends (and nearest neighbors) are murdered in their beds, Marjorie has a whole new set of worries come home to roost. One of her murdered neighbors was clutching a strange amulet, and knowing Marjorie's powers of research, Sheriff Jenkins asks her to find out what it is. As she closes in on the identification of the amulet, more people die, and that makes Marjorie realize that the killer has to be closing in on her as well.

From the very beginning of See Also Murder, author Larry Sweazy plopped me down right in the middle of Hank and Marjorie Trumaine's North Dakota farm. You get a true feel for life on the Great Plains in the 1960s. Not just the weather. Not just what needs to be done on a farm. But the loneliness, and also-- with things like party lines on the telephone-- the interconnectedness of people in rural areas.

As I watched Marjorie care for her husband and cook, clean, and index with her constant companion Shep the border collie, I was completely immersed in her world of no microwave ovens, no mobile phones, and no computers. Part of her world is creating indexes for books, and I appreciated the insights into that as well, especially since I've used them for years but never really gave their creation any thought.

Marjorie's mind is an orderly one, as you'd expect from a professional indexer, and somehow Sweazy uses that orderliness to lull readers into a false sense of security. Trouble, when it comes, is violent and frightening.  As closely as I was paying attention, you'd think that I would have the mystery all figured out. Think again. When the killer was revealed, it came straight out of left field. And when I began to say, "But wait a second!" I went looking through the pages of See Also Murder and found all the carefully planted clues that I didn't see the first time around.

My little grey cells are still percolating with this first Marjorie Trumaine mystery, so you have to know that I have the next book (See Also Deception) on my radar!