Portrait of Jennie by Robert Nathan 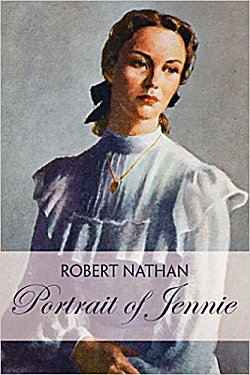 First Line: There is such a thing as hunger for more than food, and that was the hunger I fed on.

Down-on-his-luck young artist Eben Adams just can't seem to find a subject to paint that makes people want to part with their hard-earned money... until he meets a young schoolgirl named Jennie Appleton in Central Park. There's a quality about little Jennie that Eben just can't define. Is it her old-fashioned clothing? Is it the way she talks about things that happened a long time ago?

I decided to read this novella because I remembered watching (and enjoying) the 1948 film starring Joseph Cotten and Jennifer Jones which was based on the story.

So which is better, the novella or the film? The novella, of course! I liked Nathan's writing so much that I'm going to make a point of looking up his other works. In a short period of time, Robert Nathan delineated some memorable characters. Besides Eben himself, I particularly enjoyed the gallery owner Henry Matthews and his assistant Miss Spinney.

Portrait of Jennie comes to life when Eben talks about art, and the scenes describing a hurricane are so vivid that I felt as though I were there. There is a paranormal aspect to the story because Jennie is actually a spirit, but those scenes are so fleeting that I scarcely noticed them. For me, it was all about Eben, and Eben makes it a very good story indeed.