Gold of Our Fathers by Kwei Quartey 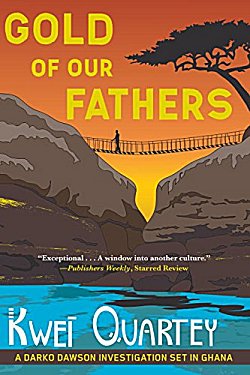 First Line: Dark gravel, the gray-and-black color of an aging man's beard, renders the most gold.

The Ghana Police Service has a brand-new Chief Inspector: Darko Dawson, but Dawson doesn't even have time to celebrate his modest increase in salary before he's transferred from the capital to Obuasi, a  remote town in the Ashanti region which is known for the illegal exploitation of its gold mines.

Obuasi police headquarters is a complete mess, morale is low, and discipline is practically non-existent. Before Dawson can even begin to formulate a battle plan to get the station and its officers in shape, he's called out to a murder. The body of a Chinese mine owner has been uncovered in his own gold quarry.


As far as Dawson knows, he's going to be in this remote region of Ghana for an entire year. This means uprooting his entire family, finding a decent place to live, a new job for his wife, and a school for his two sons. The logistics were daunting and just the thought of that wore me out, but as soon as Darko's wife appeared on the scene, all that was left to her-- including the nightmarish renovation of their new home. Dawson had a murder to solve and couldn't waste time on any of this. (Typical man, eh?)

I have enjoyed this series since the very first book, Wife of the Gods. Not only do I enjoy Quartey's strong mysteries and well-delineated characters, the vivid setting of Ghana, its culture, and its people are not to be missed. In Gold of Our Fathers, Quartey brings readers right into the middle of the problem of illegal Chinese immigrants coming to Ghana to mine gold, all aided and abetted by paid-off corrupt government officials. As Dawson wonders why the government is allowing outsiders to rape his beloved country of its natural resources, readers are shown how difficult policing is in a country where bribery and corruption are rife.

Although Dawson has a recurrence of PFS (Pretty Face Syndrome) and there was a bit "too much middle" that made the pace drag a little, I still enjoyed this book a great deal. Fiction in general-- and crime fiction in particular-- does have the power to both enlighten and entertain, and Kwei Quartey is very adept at both.

I'm really looking forward to the next book in this series because Quartey surprised me. Out on his investigation, Dawson swore there was no way in the world he would step foot on something. I call that the Bank Line because you can take it to the bank that, sooner or later, Dawson is going to have to do what he swore he wouldn't. Well... he didn't, and the only thing I can think of is that the author is going to deposit that Bank Line in the next book. Bring it on!