Design for Dying by Renee Patrick 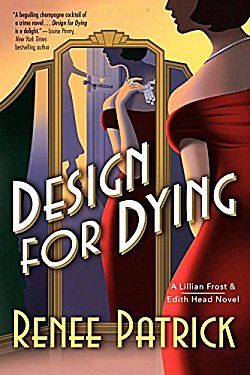 First Line: The hem of the dress was drenched in blood.

Lillian Frost came to Los Angeles in 1937 with dreams of becoming a star. Reality turned her into a department store sales clerk, and bad luck made her a suspect in the murder of a former roommate. Beautiful Ruby Carroll wanted it all. Instead she became a corpse wearing a gown from the Paramount Pictures wardrobe department.

In trying to clear her name, Lillian meets Edith Head-- a woman who's yet to win any of her eight Academy Awards. Word on the lot has it that Edith's job is hanging on by a thread, so scandal over missing clothing is the last thing she needs.

Lillian and Edith join forces and find themselves facing a hotshot director, a Hungarian princess, and a shady private detective. All they've got going for them is sheer determination and some help from people like Bob Hope and Barbara Stanwyck.

I tend to like reading books set during the Golden Age of Hollywood and I've always admired Edith Head's talent, so I looked forward to reading Design for Dying. For the most part, I was not disappointed (even though the attitude of some of the police officers toward women felt more like 2016 than 1937). The book suffered a bit from "too much middle" when the pace began to drag, and a few of the plot devices were easily guessed. (No, I'm not going to say what they were.)

But there were still surprises, and the book came to life with Lillian Frost's point of view and wit, Edith Head's talent, and the spotlight that shined on the inner workings of a movie studio in general and the wardrobe department in particular. Cameos by such luminaries as Preston Sturgis, Bob Hope, and Barbara Stanwyck added depth and humor to the story.

Lillian and Edith make a strong team, and I'm looking forward to their next adventure. Design for Dying is a light, fun read for anyone who isn't a stickler for all the details to be letter perfect in their historical mysteries.