The Infidel Stain by M.J. Carter 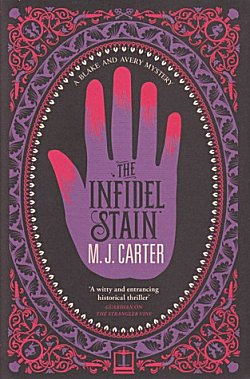 First Line (from Prologue): The still, quiet shop was a blessed shelter from the biting cold.

Time and distance have lessened the bond between Jeremiah Blake and William Avery. It's 1841, and Avery has come to London feeling a bit tired of country life and a little uneasy in his marriage. Things are much different than they were in India, and he's having trouble adjusting.

A series of gruesome murders bring the two men back together. All the victims had some connection with London's gutter press, and they were all murdered in the same way, yet the police seem very unwilling to investigate. It takes a rich and titled man known for his religious principles and his work to improve the conditions of the poor to set the two men the task of finding the killer. They soon find themselves racing against the clock amongst criminals, pornographers, missionaries, whores, and political extremists in the teeming streets of the poorer sections of the city.

I enjoyed Carter's first Blake and Avery mystery, The Strangler Vine, with its exotic Indian setting, but I wondered how I would like this second book with both men back in London. I need not have worried. Carter is positively Dickensian in her description of the poor sections of the city; they came to life before my eyes. There was even a tiny scene in which Dickens appeared that made me smile. Those few words brought the man to life in a way that biographies never have.

In The Infidel Stain, we learn more of the background of the mysterious Jeremiah Blake, and once again it's proven how dissimilar the two men are. One way Carter does this is with my favorite character in the book (outside of the two heroes), young Matty Horner. Ever since her parents died, it's been the worst sort of fight for survival for Matty and her little brother. As her history unfolds, we see Avery's more conventional reaction to her, and then we see Blake's, who tells Matty at one point, "You kept your head above water when the world left you to drown."

Carter does an excellent job of placing her book right within the social and political events of the day, and as I read, I was reminded that London in 1841 is eerily similar to what's going on today. (The more things change, the more they remain the same.) She also provides glints of humor amidst all the seriousness, as when Blake's assertion that "No reading is ever wasted" is proven beyond doubt.

As good as the story is in this book, I found it to have the same problem as her first book: pacing that sometimes slows to a crawl before it picks up again. Perhaps some of the wonderful period detail could be edited in order to tighten the narrative?  Be that as it may, I enjoy immersing myself in M.J. Carter's Blake and Avery books, and I look forward to the third.