The High Flyer by Elizabeth Darrell 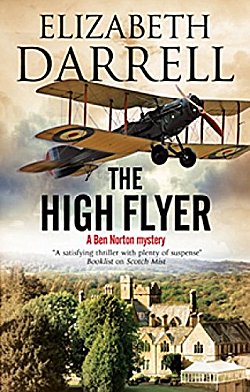 First Line: He was there when it happened.

1930. The fate of Marshfield Aviation hangs by a thread after their prototype fighter plane fails to pull out of a dive, killing the pilot. Only one man seems capable of turning disaster into success: Ben Norton, a mysterious man who identifies himself to the widow as a close friend of her husband during their time in the Royal Flying Corps during World War I.

Norton becomes Marshfield's new test pilot. Convinced that the pilot and the prototype plane were victims of sabotage, Ben is determined to find the person responsible. But while Ben looks for a saboteur, the dead pilot's wife wants to know why her husband never once in eight years of marriage mentioned having a close friend named Ben Norton.

Elizabeth Darrell's first Ben Norton Aviation mystery paints a wonderful portrait of the early days of flying and some of what was required to bring an idea from the drawing board to the assembly line. These aviation scenes truly bring The High Flyer to life.

The author has also created a solid mystery with a very satisfying solution to the test pilot's death. I always like closing a book and thinking, "I never would have thought of that!"

Not all the questions surrounding Ben Norton are answered in The High Flyer, which means more unveiling in future books in the series. He's very complex, and I would like to peel back more of his layers, but keeping all these secrets made Norton's character an aloof one. I always felt as though I were on the outside looking in, never to get a decent idea of what sort of man he is. He also had an annoying habit of changing his mind daily about the identity of the saboteur, and that got very old very quickly because he always seemed ready to hang the newest suspect up from the highest yardarm. At least Ben isn't indecisive....

If you're in the mood to put on your scarf and goggles and experience some of the early days of flying, and if the gradual revealing of a mysterious man's secrets are what you hanker for, I'd say you need to read Elizabeth Darrell's The High Flyer.